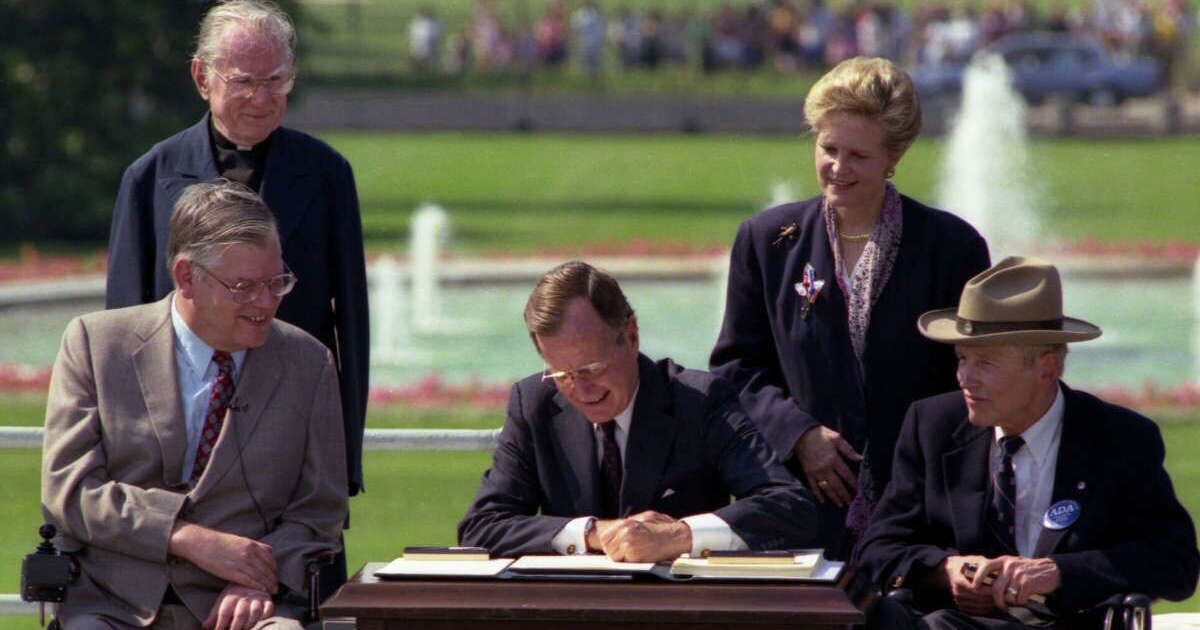 On July 26th, 2015, we will celebrate the 25th Anniversary of the signing of the Americans with Disabilities Act (ADA). This historic piece of legislation was a watershed moment for civil rights for all people with disabilities throughout the world. In some ways, we can view the history of disability rights and the ADA in a very short window from the mid to late 1960s and early 1970s through to its legislative passage in 1990. From that perspective, the ADA was the culmination of merely two and a half decades of civil rights activities by disability advocates beginning from the Civil Rights Act of 1964. But in reality, the ADA is rooted in a long history far too important to forget. Understanding this history gives perspective to where we are today. After all, today we have a generation of young Americans with disabilities who never experienced life prior to the ADA.

I was age 19 in 1979 when I acquired my disability from a car accident. That was 11 years prior to the ADA. Although much had improved for people with disabilities by then, there was still so much more to do. At that age, I can remember the old-timers telling me how good I had it and how much worse it was back in the 1950s and 60s. It is for this reason I think it’s important to never forget the roots of the ADA and how long it took to get here. I hope this will inspire our younger ADA generation to keep the fire burning and never give up our fight for civil rights.

So the truth is, the ADA was centuries in the making, if not from the very beginning of humankind itself. The oppression and discrimination against people with disabilities can be traced to biblical times and probably even earlier. In Christian theology, disability was characterized as something that could be cast upon you for not following the teachings of God. Disability could be something you received from God if you did not obey his commandments or for doing wrong. Interestingly, the Bible also articulates compassion for people with disabilities, recognizes the need for certain protective laws, and even strikes fear and guarantees retribution against anyone who might commit an abusive act upon a person with a disability (see Leviticus 19:14 and Deuteronomy 28:15, 28-29).

From medieval times, the Renaissance, the 18th and 19th centuries, the Industrial Revolution, and more than half of the 20th century, people with disabilities were subjected to a broad range of oppression and discrimination, as well as treatment and intervention. The middle ages saw the demonology or supernatural attributes to all kinds of disabling conditions. People with disabilities were faced with managing survival through a variety of supports such as family, neighbors, employers, charitable institutions and begging.

However, dramatic shifts occurred during the late 18th and early 19th century as institutional solutions and interventions become the norm. The problems posed by poverty and disability were solved by establishing institutions such as houses of correction, workhouses, asylums and “madhouses”. Segregated schools and institutions for persons with physical disabilities, deafness, blindness, mental illness and intellectual disability took root throughout Europe and North America.

Also during this time, professionals developed differential diagnosis to particularize disability, and devised treatment interventions and educational methods focused on specific “impairments”. Social Darwinism and the Eugenics movement began to take hold and gave rise to the belief that disability was considered a degrading of the species. The eugenics movement led to laws in the United States that segregated people with disabilities, and even prohibited marriage and procreation. Forced sterilization laws were viewed as normal and appropriate. In Buck v. Bell, (1927) the United States Supreme Court ruled that states have a legitimate interest in sterilizing people with intellectual disabilities.

Almost as appalling were “Ugly” and “Idiot” laws. From the late 1860s until the 1970s, several American cities had ugly laws making it illegal for persons with “unsightly or disgusting” disabilities to appear in public. The ‘‘Idiot Law’’ goes back to 1846, when it said, “No white person shall intermarry with a negro, and no insane person or idiot shall be capable of contracting marriage.”

The aftermath of World War II and the effects of Nazism and the Holocaust, combined with medical research on the causes of disability, led to an increasing respect for people with disabilities that eventually led to our recognition as equal citizens in the United States as evidenced by the passage of the ADA.

It was this long and shameful history of discrimination and oppression that set the stage for a disability rights movement that began shortly after the civil rights movement of African Americans. Disability rights advocates saw the opportunity to legislate change that would put an end to centuries of negative stereotypes and attitudes, and eliminate barriers to equal participation in American society. Thus, the road to the ADA was about to be paved as advocates began chipping away at societal barriers by securing modest legislative victories.

These victories included: 1) the Architectural Barriers Act (1968) which prohibits architectural barriers in all federally owned or leased buildings; 2) the Urban Mass Transit Act (1970) which requires that all new mass transit vehicles be equipped with wheelchair lifts; 3) the Rehabilitation Act (1973), particularly Title V, Section 504, which prohibits discrimination in federal programs and services and all other programs or services receiving federal funding; 4) the Education of all Handicapped Children Act (1975), now called the Individuals with Disabilities Education Act (IDEA), which requires free, appropriate public education in the least restrictive environment possible for children with disabilities; 5) the Air Carrier Access Act (1988) which prohibits discrimination on the basis of disability in air travel and provides for equal access to air transportation services; and 6) the Fair Housing Amendments Act (1988) which prohibits discrimination in housing against people with disabilities and families with children.

The Rehab Act of 1973 was a monumental victory, but it took four years to get regulations written so enforcement could begin. In April 1977, activists demanding that Section 504 regulations be issued staged sit-ins at several Department of Health, Education, and Welfare (HEW) buildings throughout the country. The sit-in at the San Francisco HEW building, organized by Judy Heumann, lasted 28 days, longer than any civil demonstration in U.S. history.

Many other such grassroots demonstrations and acts of civil disobedience played a part in passing civil rights laws that improved life for people with disabilities. The activism of Wade Blank in establishing the advocacy group called ADAPT led the fight for accessible public transportation, in-home personal assistance services, and an end to unnecessary institutionalization. 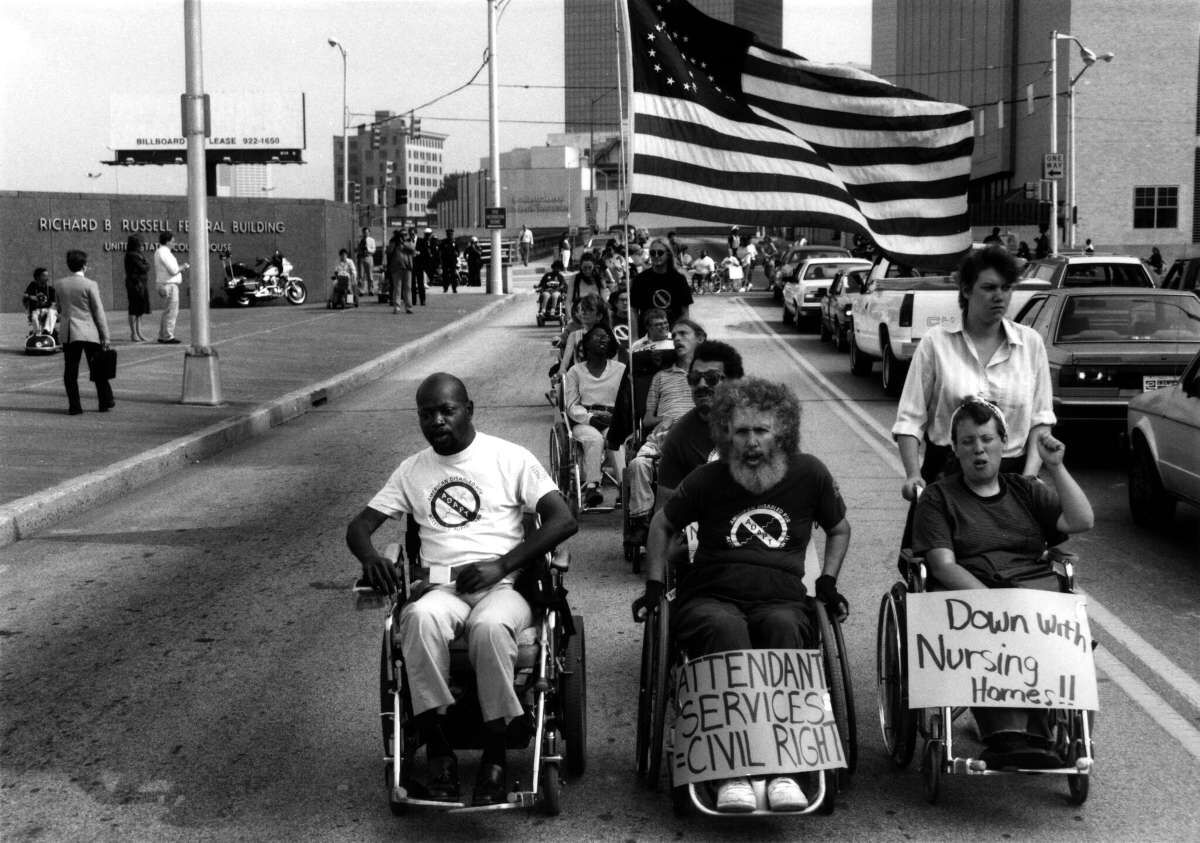 Photo: Bob Kafka leads ADAPT activists in a demonstration for home and community based services in Georgia

The rise of the Independent Living movement and the pioneering work of Ed Roberts, the “Father of the IL movement”, led to the establishment of more than 450 Centers for Independent Living (CILs) across the country. Ed, who had polio and lived in an iron lung and later on a ventilator, not only started the first CIL in the country in Berkley, California, but also became the Director of the California Department of Vocational Rehabilitation, the same organization which 20 years earlier denied him services because he was “unemployable”. 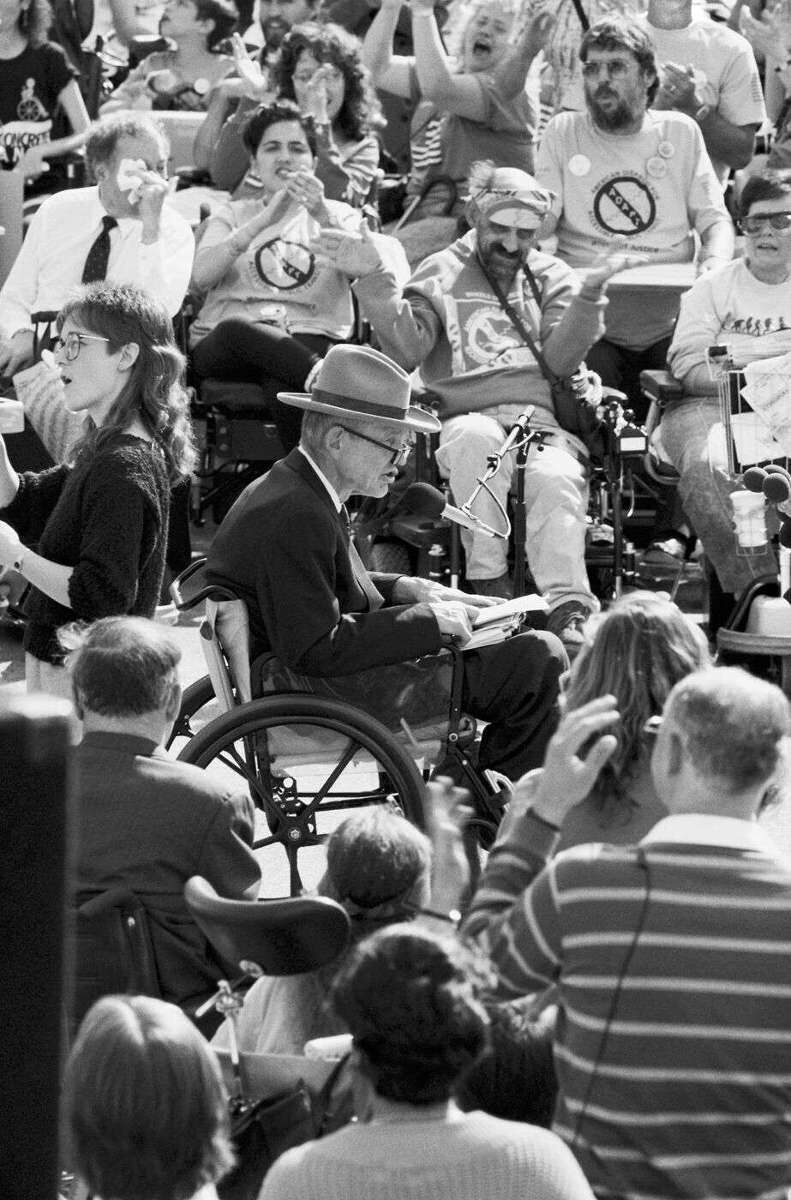 Photo: Justin Dart addresses the crowd of activists at the West Front of the Capitol preceding the Capitol Crawl in March 1990

Also prominent was the advocacy of Justin Dart, who is considered the “Father of the ADA”. Dart traveled twice to all 50 states and territories in the early and late 1980s, chronicling the injustices and discrimination endured by people with disabilities. As the newly appointed vice chair of the National Council on Disability, Dart used these two nationwide journeys to legitimize NCD’s report to Congress and justify the need for an ADA. 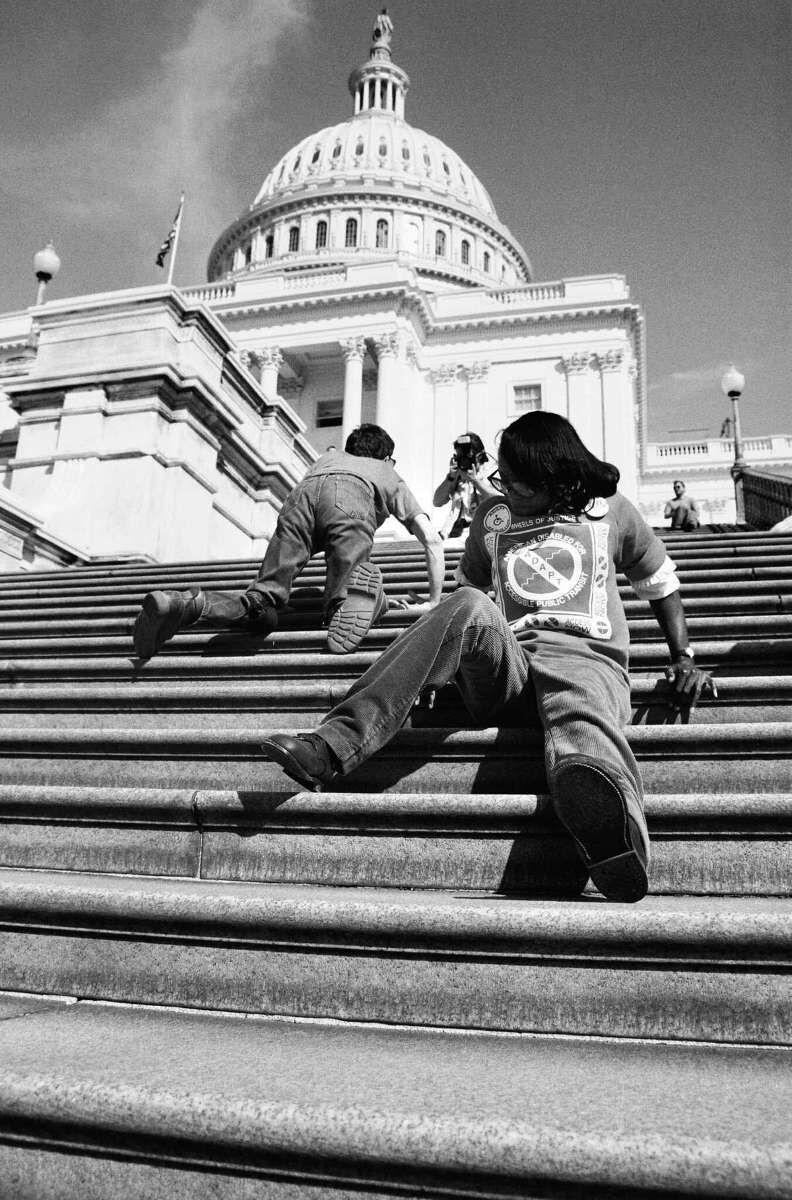 Photo: Activists crawl up the steps of the Capitol Building

In March 1990, when the ADA seemed destined to be stalled in Congress, ADAPT held a march from the White House to the steps of the Capitol. Sixty disability activists with physical disabilities shed their crutches, wheelchairs, powerchairs and other assistive devices and proceeded to crawl up all 78 west side steps of the Capitol. A “tour” of the Capitol that ADAPT had arranged turned into a meeting in the Capitol Rotunda between ADAPT and the House Speaker and the House Minority Leader. Although the action resulted in the arrests of 104 grassroots demonstrators, the “Capital Crawl” as it would become to be known, pushed the stalled ADA bill out of committee. 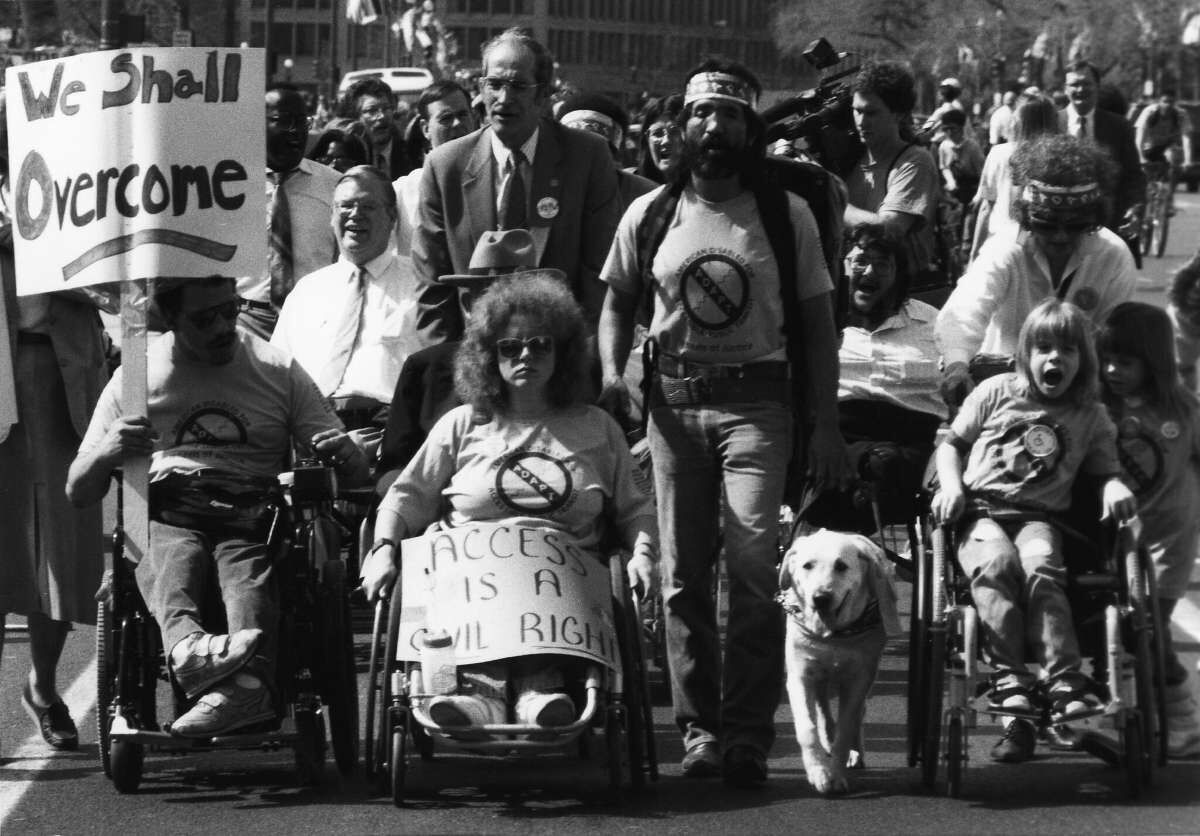 Photo: Activists at the ADAPT march in Washington

Even the education that then Vice President George H.W. Bush received from the disability community during the Reagan Administration was instrumental in the passage of the ADA. President Reagan established the Task Force on Regulatory Relief under the leadership of Vice President George Bush. The Task Force was assigned to “de-regulate” regulations which were burdensome on businesses. After much protest by the disability community, the Administration announced a halt to all attempts to de-regulate Section 504. This was a tremendous victory, as it set the stage for the ADA and gave high officials of what later became the Bush administration an education on the importance of the concepts of non-discrimination contained in Section 504 in the lives of people with disabilities.

Ironically, it was President Bush who tipped off the disability community that Congress and his own advisors were trying to kill the ADA bill. Evan Kemp, Jr., who lived with spinal muscular atrophy since age twelve, was an attorney, Republican and Washington insider who had recently been named Chairman of the U.S. Employment Opportunity Commission by his friend President Bush. Subsequently, a month before passage of the ADA, Kemp called Wade Blank and Marca Bristo, then-president of the National Council on Independent Living (NCIL), and they organized an evening march to the White House. That demonstration gave the President the excuse to ask why protesters were angry with the administration and send another strong message to White House staff that he wanted the ADA passed.

The rest is history, as President Bush signed the ADA into law on July 26th, 1990. There are so many other important people, organizations and events that contributed to the passage of the ADA. All of these are too numerous to cite in a short history of disability rights and the ADA, but if you want to learn more about the people and history that played a part in disability rights and the ADA, go to http://www.adalegacy.com/ada25. 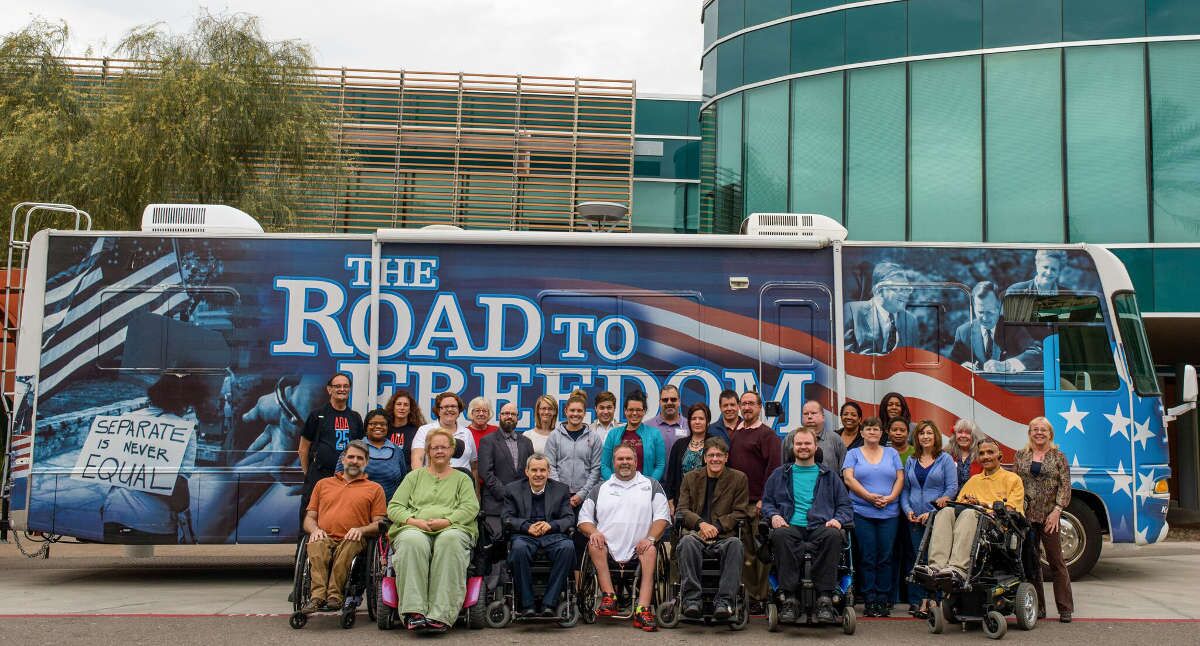 Photo (by David Creighton): Ability360 employees sit and stand in front of a bus with images of protestors and the words “the road to freedom” on it

Source: David Braddock’s DISABILITY: At the Dawn of the 21st Century, © 2002, American Association on Mental Retardation.

Source: Equality of Opportunity, The Making of the Americans with Disabilities Act, Jonathan M. Young Copyright © 1997, 2010 by the National Council on Disability.

Source: The History of the ADA: A Movement Perspective by Arlene Mayerson 1992. 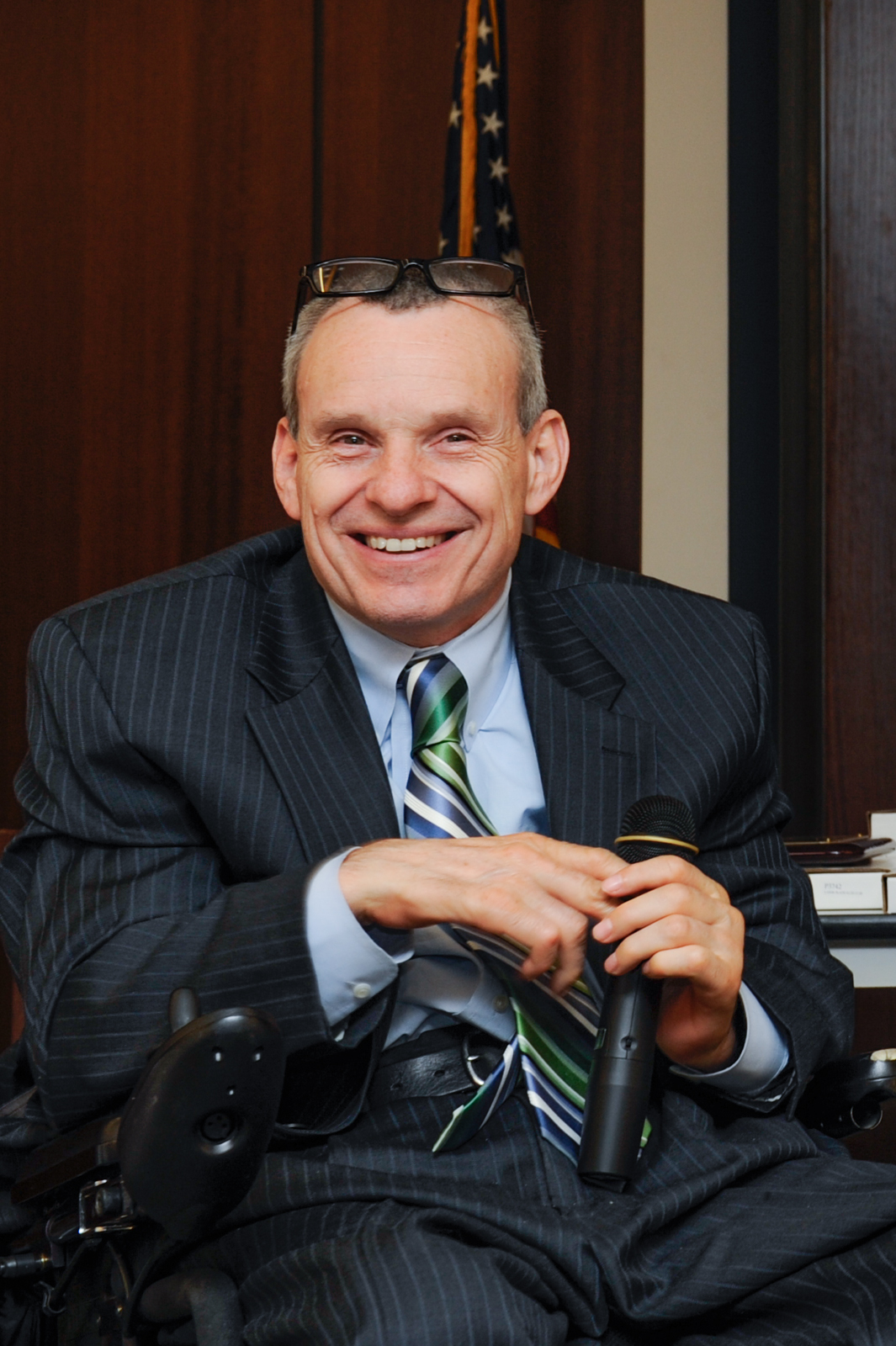 Phil Pangrazio is the President and Chief Executive Officer (CEO) of Ability360, one of the largest Centers for Independent Living in the United States, with an annual budget exceeding $35 million. Pangrazio oversees a wide array of programs designed to empower people with disabilities to achieve or maintain independent lifestyles within the community. . 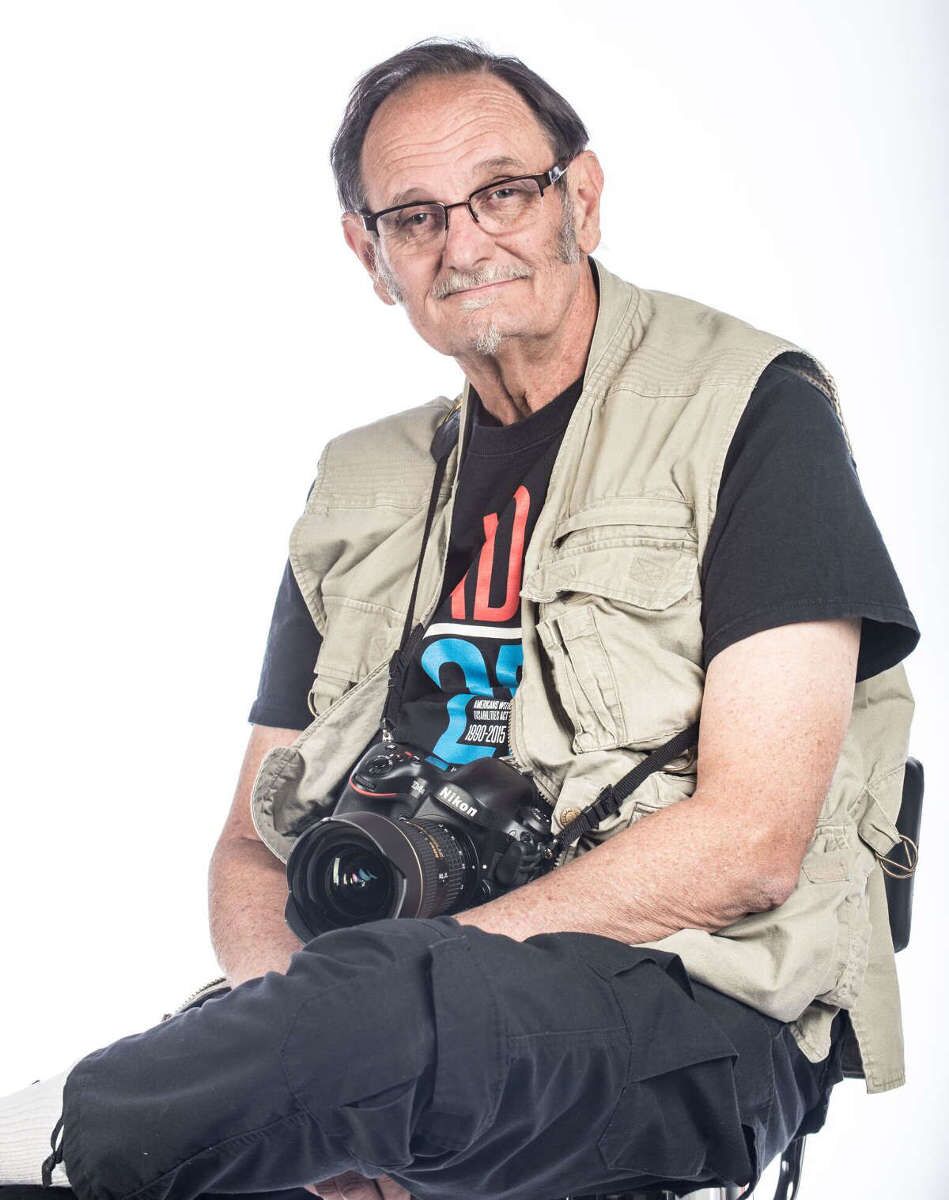