Message from our CEO

You can’t always win. And if you do, you probably aren’t pushing hard enough. We started advocating for a light rail stop about a year after the Sports & Fitness Center opened in October of 2011. We knew it would make a difference. We knew it was important to our consumers. We were often discouraged and told it would be nearly impossible. We didn’t give up.

Now, seven years later and a whole lot more advocating, I am excited to announce that the new light rail station located at 50th Street and Washington just west of the Ability360 Center is planned to open in mid-March. Valley Metro is working on a grand opening celebration that we’ll soon share once we know the date and details.

The opening of this additional station is a monumental achievement for all the advocates who voiced their support for its construction. Without their efforts, this would not have happened. We proved that advocacy can move mountains and create incredible change anywhere!

The new station is fabulous news for thousands of people with disabilities who have waited 10 years for easier access to the Ability360 Center. Public transit and light rail users from all across the 26-mile system from east Mesa to north Phoenix will now have the stop they’ve longed to use.

We have many people to thank, especially the citizens of Phoenix who supported the transit tax extension, but also former Phoenix Mayor Greg Stanton and the entire City Council who ensured it got built with the new transit tax funding.

I’d also like to give a special shout-out to the late Congressman Ed Pastor who voiced his support for moving the station as close to the Ability360 Center as possible. Thank you, Ed. Every voice made a difference!

Finally, as we look forward to 2019 and beyond, I hope everyone will advocate for a worthy cause, an unmet need or a solution that will make everyone’s future better. Determined advocacy can make it happen.

If Ability360 is not the closest Center for Independent Living (CIL) to you, reach out and get involved with one near you. You’ll likely find that you aren’t the only one in need of a change in the law, improved accessibility, or heck, maybe even the next bus/light rail stop. 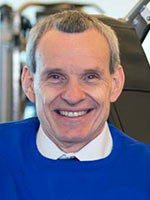