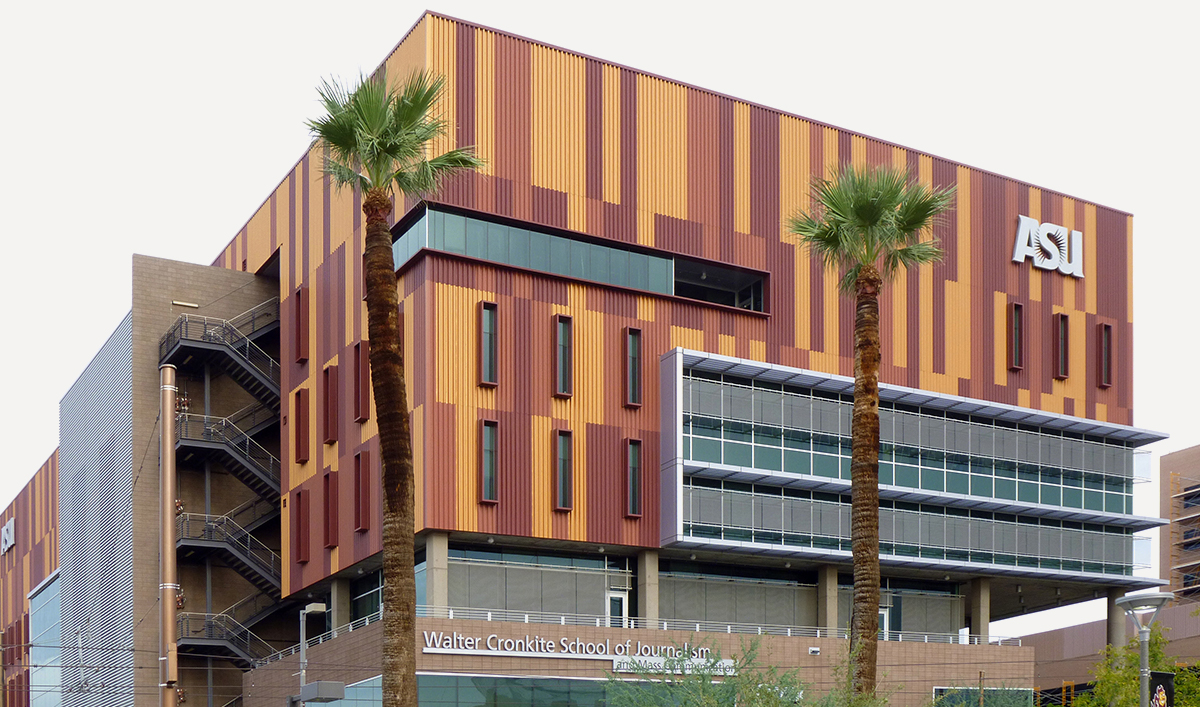 The National Center on Disability Journalism

You’ve seen it, a media story about a person with a disability that makes you cringe at how that person is portrayed.

The interviewer treats the person with a disability as though they are a child. Words like “tragic,” “hero,” “inspiring,” “confined to a wheelchair” “deranged” or “deaf and dumb” are breathlessly thrown around. The journalist’s tone makes it clear that people with disabilities are special… different; either superheroes or tragic waifs. Media’s framing can powerfully influence how the public thinks about a story.

One organization in Arizona seeks to transform the conversation about disability issues by educating journalists on best practices and word usage. The National Center for Disability and Journalism (NCDJ) works to correct these negative and inaccurate portrayals by highlighting excellence in reporting on disability issues and the people impacted.

Founded in 1998 by photographer Suzanne Levine as the Disability Media Project, it was renamed The National Center on Disability Journalism in 2002 and found temporary homes first at San Francisco State University then Boston. In 2008, the Center finally came to Arizona State University. “It was little more than a box of documents and a URL when we acquired it. We were fortunate that Jake Geller was here working on his master’s thesis on the portrayal of disability in journalism. He took the fledgling guide and developed it. He was Cronkite’s first ‘real’ director.” says Kristin Gilger, Dean of the Walter Cronkite School of Journalism and Mass Communication and Director of the NCDJ.*

*The online version corrects the role of Jake Geller in the development of the NCDJ style guide originally created by Suzanne Levine.

It was Geller, a working journalist returning to ASU for his master’s degree, who happens to live with a disability (Duchene muscular dystrophy), who took Levine’s original style guide and developed the more robust version in use today. Geller said, “The Guide was crucial because most working journalists want to stay in line with acceptable guidelines, when they’re in doubt, they can say ‘ok, this is what my peers use.’”

“The style guide is a great tool to shape the discussion of disability and journalism,” says Gilger. “Language around disability can be contentious; even the organizations by and for people with disabilities don’t agree. We offer a short context paragraph to offer an explanation. The style guide distills current thinking and acknowledges differences within the community.” The most current revision of the style guide was two years in process and contains a notable change; every entry has a reference to the “bible for journalists,” the AP Style Guide. “In the original Guide, we made a point of noting where we disagreed with the AP guide and why. In this revision, we found the many places where the AP guide was silent. Eye opening.”

The Guide is a balance of what the general public understands and the most current language used in the community. The Guide offers reporters an authoritative source for conversations with their editors when they deviate from the AP. When there is conflict, Gilger advises writers to ask the person and follow the language and identifiers that person chooses to use for him/herself. “The Guide confers authority,” Gilger explains. Even Geller, who arguably wrote the book on disability language in journalism, refers back to the Guide. “I rely on it. It’s a good reminder and an education on what terms really mean and how people feel about the language that identifies them.”

Gilger advises people who take issue with a journalist’s depiction of disability to contact that reporter directly, explain the issue and point to the NCDJ Style Guide as a future reference.

Katherine Schneider Journalism Award for Excellence in Reporting on Disability*

Now in its third year, the Katherine Schneider Journalism Award for Excellence in Reporting on Disability was created through a grant from Schneider, a now-retired psychologist who also created the Schneider Family Book Awards, which annually honors an author or illustrator for a book that embodies an artistic expression of the disability experience for child and adolescent audiences. Schneider has been blind since birth. Gilger thinks of the contest as a “carrot instead of a stick.” Geller likes that it shows “this is what you can do well in disability reporting.”

Awareness of the award has grown steadily. This past year, more than 80 entries were received from international print, radio and broadcast stories. The entries are evaluated by a panel of distinguished journalists that, in full disclosure, includes me as a disability advocate and consumer of news. The review panels can themselves be passionate and thoughtful explorations of the professional process of journalism and the nuances of each story.

The first-place winner is awarded $5,000 and receives an invitation to speak at the Cronkite School. The second-place winner receives a $1,500 award, and additional honorable mention awards of $500 may be given at the discretion of the judges. All entries are posted on the NCDJ’s website.

2014: The New York Times for “The ‘Boys’ in the Bunkhouse,” written and reported by Dan Barry, Kassie Bracken and Nicole Bengiveno.

Also notable in 2015 was an honorable mention to The Deaf and Hard of Hearing Network, created by Peyton Gallovich and Melissa Yingst Huber of ASU, for creating the first newscast to employ sign language, voices and captions to relay the news, allowing families to watch the news together. The bi-weekly show is available online and on stations in the Phoenix area.

2015: ProPublica for “Violent and Legal: The Shocking Ways School Kids are Being Pinned Down, Isolated Against Their Will,” written and reported by Heather Vogell.

Gilger’s vision for the future includes plans for a symposium to explore best practices for journalists; support for journalists with disabilities; and outreach and collaboration with the many international requests to create a version of the NCDJ in various countries around the world.

The work of the Center is best summed up by this passage from NCDJ.org: “The center’s goal is to become the authoritative, objective resource for journalists covering people with disabilities and to be the place where such work is discussed and commented on.”

*Excerpts from the Awards segment of this story were sourced from NCDJ press releases.

Editor’s Note: The article’s author, Jennifer Longdon, served as a panel judge for the Journalism Awards contest and as a reviewer of The Guide. 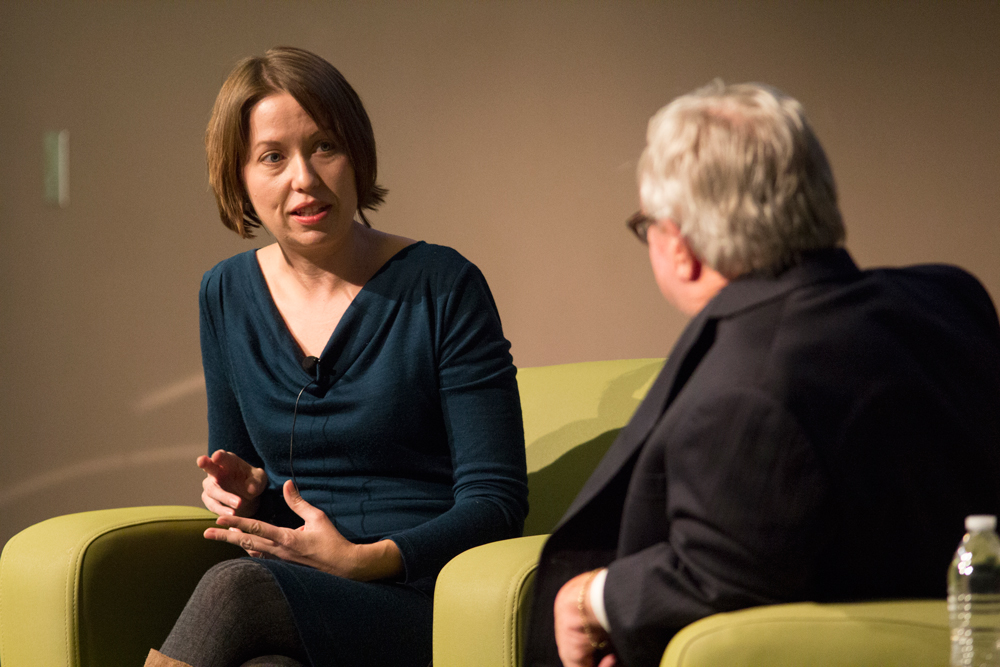 Photo by Walter Cronkite School of Journalism and Mass Communication 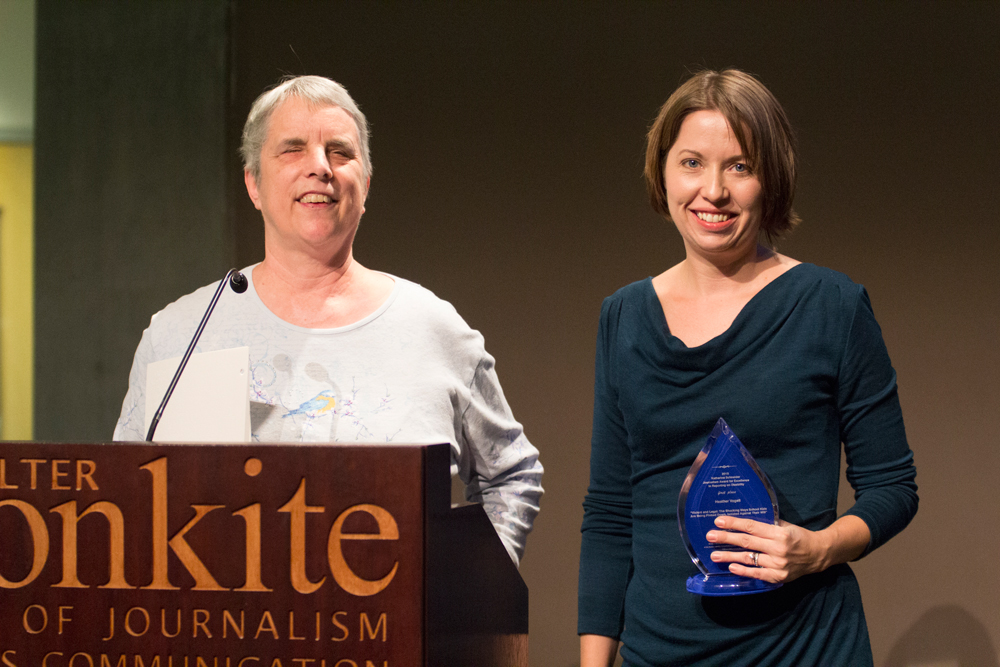 Photo by Walter Cronkite School of Journalism and Mass Communication

ProPublica investigative journalist, Heather Vogell, winner of the Katherine Schneider Journalism Award for Excellence in Reporting on Disability, was in Phoenix to discuss her prize-winning work, “Violent and Legal: The Shocking Ways School Kids are Being Pinned Down, Isolated Against Their Will,” which examined the use of forced seclusion and restraints on students with disabilities.
LivAbility sat down with Vogell to discuss her work; following are excerpts edited here for space and clarity.

LivAbility: What brought this issue of classroom use of restraints to your attention?

Vogell: I got a phone call from an advocate, and she was in touch with the mother of a kindergarten boy who was being repeatedly restrained in his classroom and she’d been trying to get them to stop and had been unsuccessful so far.

So, this advocate told me this whole story, and I had not been aware this was happening in schools. A few weeks later, I came across a report that was put out by a Senate committee about the issue of restraint seclusion being used in schools, and they were introducing legislation that had been languishing for years in Congress which would have created a universal set of rules that would have restricted schools’ ability to use these techniques. That bill had gone nowhere and it’s gone nowhere since then.

Vogell’s data indicated that roughly ¾ of the 267,000 reported cases of combined restraint and seclusion were students with disabilities. One of Vogell’s challenges in her reporting was recognizing that these numbers represented a “huge undercount that was still a staggering number that had never been reported before.”

Vogell quickly learned that the use of seclusion and restraint was very loosely regulated. The rules varied from school-to-school, from district-to-district and from state-to-state. To more clearly represent the information, she worked with others to create a scorecard that used 6 criteria:

With 10 being the best score, Arizona scored a 4.

LivAbility: What surprised you most in your reporting on this story?

Vogell: The original tip ended up not being the lede in the story. What surprised me was how easy it was to find other people who had been through experiences that were – terrifying, frankly. This was not a very rare thing that I had come across. It shocked me that this was something that was out there everywhere. 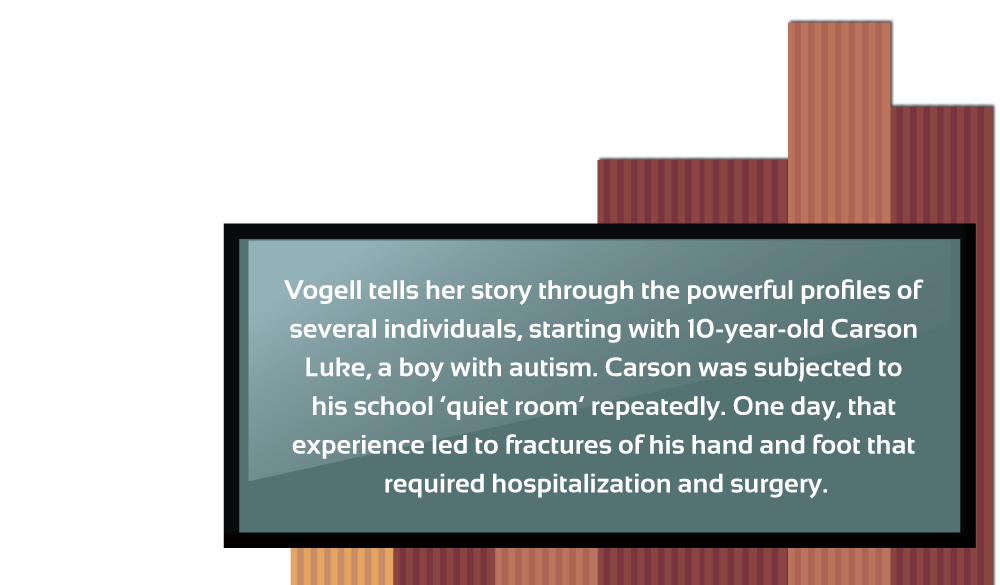 Vogell relates Carson’s experience through his mother Heather’s words: “He said you can hear them do the locks, which is how I know there were three,” Luke says. “There were times when they would put him in there, and he would be screaming. They would say, ‘If you don’t shut up, we’re going to put the fan on.’ He hated the sound.”

Read Heather Vogell’s full story: “Violent and Legal: The Shocking Ways School Kids are Being Pinned Down, Isolated Against Their Will” at ProPublica.org. Our taped interview with Vogell is available on our website.

Jennifer Longdon is known to drink too much coffee, ask too many questions and then write about it. She has served on numerous Boards and Commissions focused on disability advocacy including the Phoenix Mayor’s Commission on Disability Issues, the Statewide Independent Living Council and the Christopher and Dana Reeve Foundation Public Impact Panel. Jen has a T-4 spinal cord injury and uses a wheelchair full time. She’s a regular contributor to LivAbility.