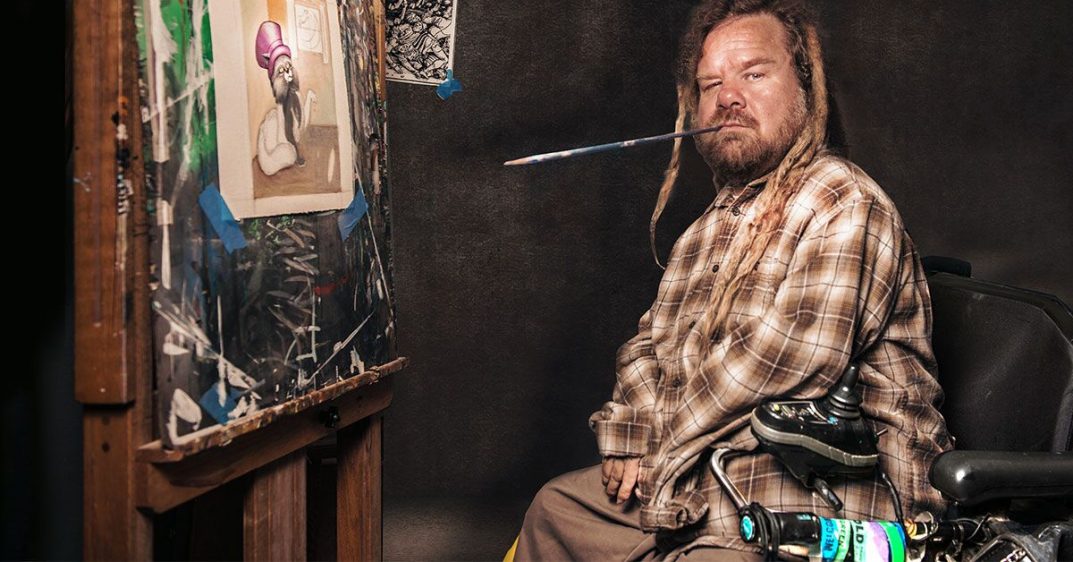 Kirk O’Hara: An Inside Look at Paintmouth

Under the right conditions, you could witness all three in the span of mere minutes.

Kirk O’Hara and First Friday go together like Roosevelt Row and hipsters. He set up for the evening in front of The Lost Leaf bar and gallery, a staple on Fifth Street, and began to paint.

Soon, people stopped. Stared. Some even whipped out their phones to take a picture. Kirk O’Hara wasn’t Kirk O’Hara anymore. 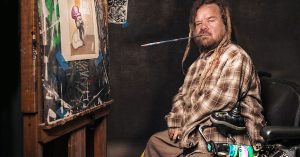 O’Hara has arthrogryposis, a non-hereditary condition that has affected his joints since birth. Although he could use his hands to make art when he was younger, he said he found that he was comfortable painting with a brush between his lips. He began to paint while growing up in north Mesa, and soon found a mentor that helped him perfect his craft.

“She had an education from Chicago Art Institute (http://www.artic.edu/) and she began training me when I was about 10,” O’Hara said. “I started doing shows five years later when I was 15.”

Since then, he’s worked in studios and done art shows.

“I’ve done the high-end shows at Caesars Palace and all those things, but my bread and butter is commission work,” he said.

Paintmouth is as much about the artist and his distinct method as it is about the art. He said that because of his disability, being creative is just a part of life.

“I’ve invented an extension for Playstation, different hooks, different clothing contraptions so I can get dressed and undressed,” he said. “You got to be inventive.”

When asked about the obstacles he’s faced as an artist, O’Hara chuckled.

“There’s always hurdles—I eat a lot of paint,” he said. “Some of it’s poisonous, like cadmium. These are heavy metals. And I didn’t think about it until recently, like, I wonder how much cadmium I’ve eaten over 30 years painting.”

There was a time, he admitted, when anger and alcohol kept him from painting. He said he owes it to art and reggae music for making him the way he is today.

“I was upset and frustrated with things. And some people came along and they inspired me. And if I could give that to another human being, if I can share that inspiration, if I can make others feel the way those people made me feel…wow, that’s the best thing there is, you know? That’s the most wonderful gift that we could give each other.”

As he fell back into the rhythm of creating, dreads bobbing, his shirt became a secondary canvas; swatches of gold and ochre streamed from his shoulders like he had just carried the sun on his back before it disappeared over the horizon.

O’Hara has no plans to stop what he’s doing. He continues to show love through his music, through his words, and through his art long after the paint has dried. 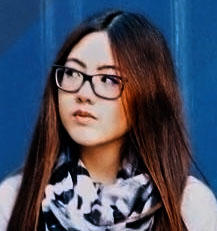