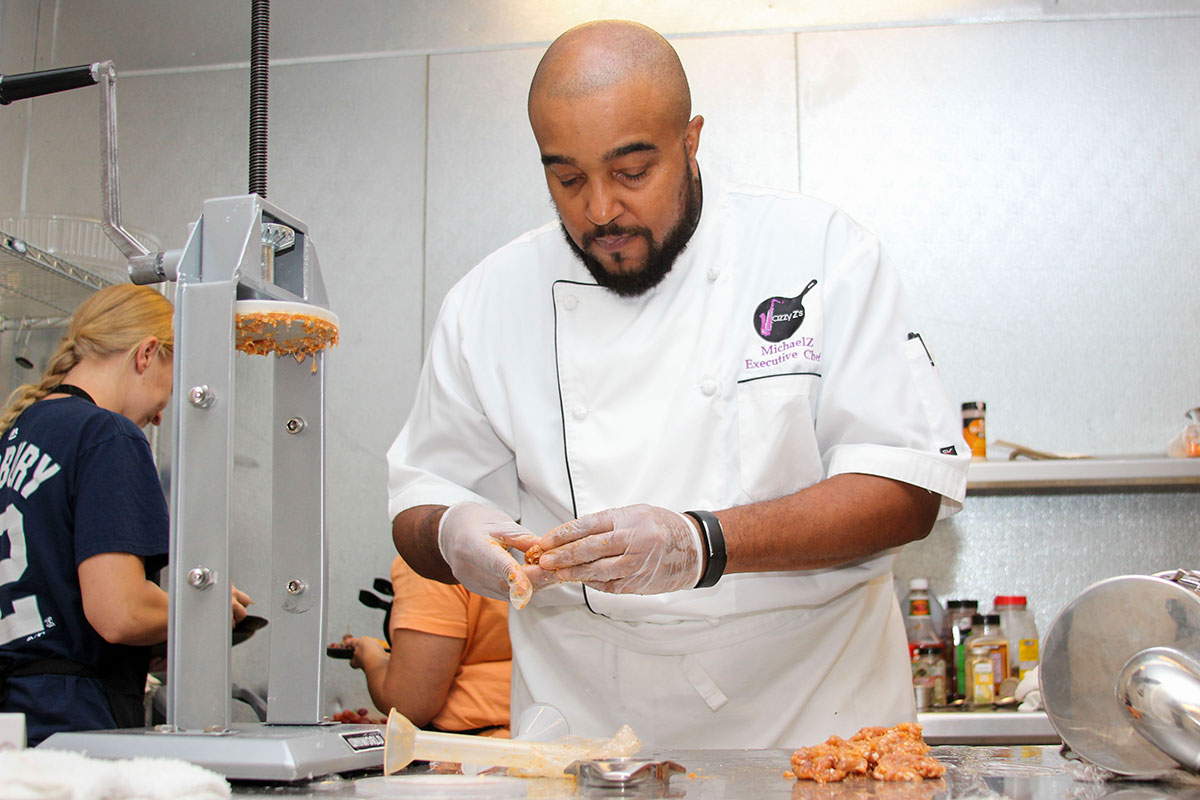 Story and photos by Brian Fore

Smooth jazz, the sound of sizzling meats and the aroma of charcoal smoke filled the Ability360 courtyard as military veterans grilled and smoked sausages, chicken and hamburgers at the Wounded Warrior Project tailgate barbecue cooking class on Friday, Sept. 16.

The barbecuing was the final day of a three-day cooking class, where local Arizona chef Michael “Chef Michael Z” Zachery, owner and executive chef of Jazzy Z’s Food Service, taught the veterans how to prepare seasonings and dry rubs and also how to cook andouille sausages, Jamaican jerked chicken and homemade hamburgers made from sirloin and chuck beef. 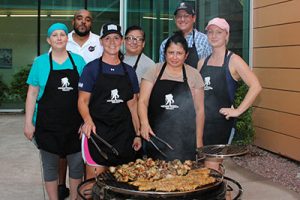 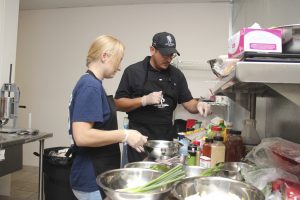 Olson met Zachery about a year ago when his assistant, who is also a personal trainer at Ability360, connected the two for an event that Olson was hosting for the Wounded Warrior Project. Since then, Zachery has given cooking classes such as simple meals to make at home as well as Thai cooking.

“I’ve really challenged him to take his recipe and modify it to where it’s healthier but you don’t lose any flavor,” Olson said.
Olson, who found out about Ability360 through volunteering, has strong connections with the military and veteran communities.
Her grandfather served during World War II, her father in the Korean Conflict, her oldest brother in Desert Storm and she has several other friends and family members who are serving or who have served.


“To just be able to help them gain back some of their independence that they’ve lost through the war, it’s awesome,” she said.

Arizona Army National Guard veteran and Wounded Warrior Project member Felice Gomez, 46, said she finds strength in events such as the tailgate barbecue cooking class because she enjoys working as a team with other veterans.

“They’re trying to get you to do things to get you out of that comfort zone, to get you to take a little bit of a challenge,” Gomez said.
In 2012, she deployed to Afghanistan for nine months, where she built roads and operated heavy construction equipment.
Often working six or seven days a week, she found it difficult to communicate with her family and especially with her daughter, who gave birth to a boy before Gomez deployed.

Gomez said she experienced anxiety and depression upon returning from overseas as well as physical problems with her legs and feet.
Her unit referred her to the Wounded Warrior Project for behavioral health counseling and she also began working with a personal trainer at Ability360.

“It was good having the personal trainer to help me with the areas that I did struggle in,” she said. “[As well as] different activities that I could do for cardio that weren’t so hard on my joints, my knees and my feet.”

Gomez said she lost her job due to complications with her anxiety and depression and had difficulty paying her rent.
A friend told her about an all-female veteran shelter, where she was accepted and has been living for the past three months.

She now works in a customer service call center for a bank and looks forward to Wounded Warrior Project movie nights with her three children, now 27, 25 and 23 years of age. 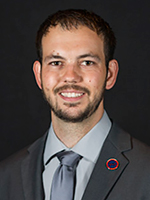 Brian Fore is a student at the Walter Cronkite School of Journalism and Mass Communication at Arizona State University studying digital journalism and Spanish for the professions.

Brian is a United States Army veteran, where he found a passion for covering military stories for the Fort Bliss Bugle. He continues to cover veterans’ issues.