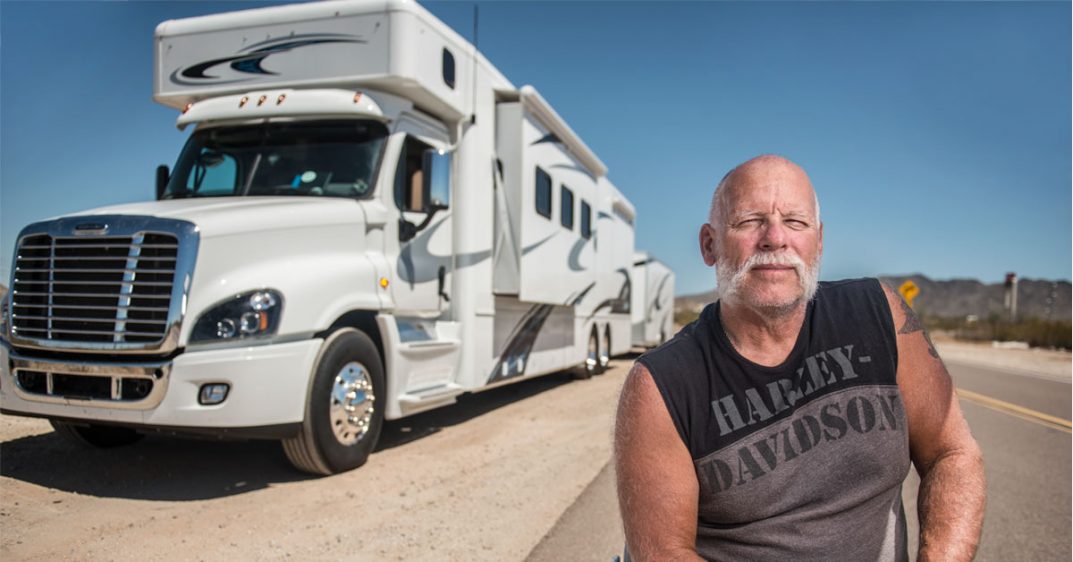 Life on the Road with Billy Marvin

Photo above by Loren Worthington
Photo below by Jerry O’Connor

“I got tired of hotel rooms being anything but accessible, so I built my own.”

That’s about as simple an answer as one could expect when it comes to how and why anyone using a wheelchair would decide to build an RV from scratch. But if you use a chair and you’ve dealt with hotels and accessibility much, you can likely relate to why Billy Marvin did just that.

On one hand Billy’s 40’ RV towing another 30 feet of trailer seems like an over-the-top luxury rig few could ever hope to call home.

But home it is. His only home. When you hear that someone’s home is a mere 330 square feet in size, then perhaps it doesn’t sound quite so opulent.

Bill’s rig isn’t exactly a frugal tiny home, especially when he fires up the diesel engine, but as any chair user knows, tiny spaces are not always easy to get around. 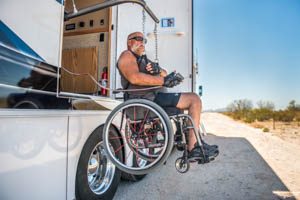 At heart, Billy is a Harley guy. More on that later but the Canadian who calls Arizona home decided to hell with hotels (and their front desk staff) after one too many reservations for an ADA room turned out to be anything but accessible. “I love to travel and it just got to be the norm that I’d book an ADA accessible room and all I’d hear is excuses on arrival about why an accessible room wasn’t available.”

As he conceived his plan to travel in an RV, he began to rethink his entire living situation. “I could not find an RV that suited my needs. So I started thinking I’d need to build it and in the process I realized I might as well just build one I could live in full-time.” He started with a Freightliner chassis and cab and built out the living quarters. The RV has a bedroom he can navigate along with an accessible shower stall. There’s a pop-out sofa section that doubles as a guest room and adjacent is the kitchen where he prepares his meals. It’s definitely luxurious but when you take a tour using a wheelchair, it’s by no means too spacious.

Billy uses a manual wheelchair. To exit the RV, he parachutes from the rear using a swing-arm lift. “I didn’t want an actual wheelchair lift,” he explains, “it just is too big when it comes to refueling at a truck stop or parking in smaller RV parks.”

The RV made its maiden voyage from Canada to Phoenix in March. Almost immediately Billy was on the road again, this time headed to Daytona, Florida for Bike Week. And it’s here that we can delve into Billy’s true passion. 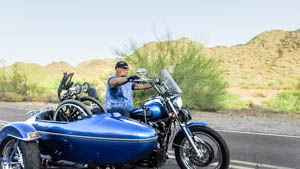 Any time a bunch of gearheads in Arizona start talking wheelchairs and motorcycles, someone will inevitably say, “I met this really cool dude from Canada who rides a Harley with a sidecar…” Yep, that’s Billy. He started riding as a teen. After he became disabled in his late 20s he bought a brand new 1993 Harley with a factory sidecar. “I had no idea how I’d even get on the bike.” That was 84,000 miles ago. Bill rides his vintage Harley along with a second custom 3-wheel bike called a Conquest. When asked which is his favorite, he replies, “I like riding them both. Neither is my favorite. It’s a good day if I’m riding any bike.”

That’s the message that Billy likes to convey. Perhaps it comes from his Canadian roots, mixed in with some biker culture and the nomadic spirit of those who live on the road. Billy’s gift is that he’s always happy to spend an extra minute (or more) chatting with anyone about his lifestyle; about how he’s adapted his bikes and his new home to work in his favor. He’s quick to say his life has been a good one for many reasons that not everyone could count on. But, his message has more to do with creating realistic goals for those who wish they could be more, or do more than what their day to day life currently presents.

It’s late May. As the summer heat begins to make its presence known, Billy is packing. With 2 bikes, you can see the need for the trailer. Billy can ride both bikes into the trailer and secure them on his own. It’s a process for sure. When he gets on the road he is over 70’ long. He’s heading to the west coast and then working his way north. “My mom’s 92nd birthday is in July. I’m heading back to Canada. I’m not missing it.”

With that, Billy, and his home, are on the road again. 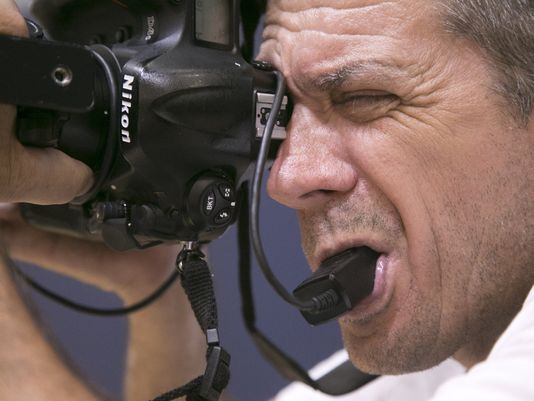 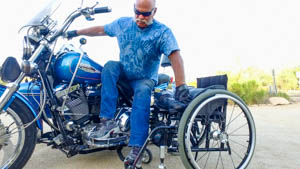 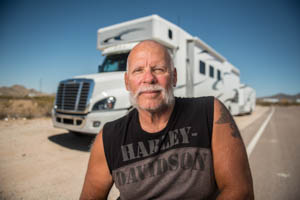