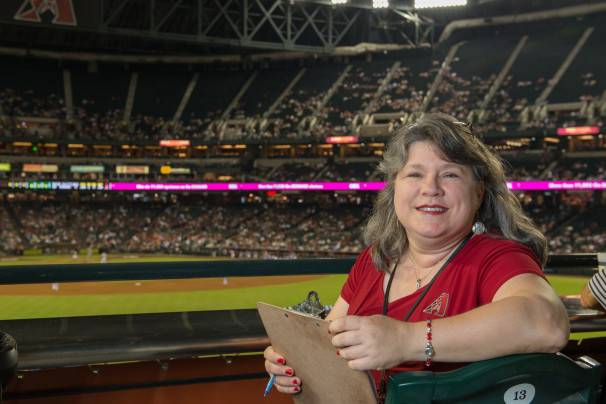 By Chris Carr
Photos by Jim Todd and Anna Werner

Whether you are hoping to see another Paul Goldschmidt homerun at the Arizona Diamondbacks game, cheering for the Suns’ Gorilla during a halftime performance, or anticipating the next desert tour date for your favorite band, Chase Field and U.S. Airways Center (USAC) are popular destinations for sports and entertainment fans in downtown Phoenix. And while it is important for the primary tenants — the D-backs and Suns — to provide a quality product for the entire crowd, both are at the forefront of ensuring that fans with disabilities have equal opportunity to enjoy the experience of visiting the stadiums.

Prior to the Americans with Disabilities Act, which was passed in July 1990, Section 504 of the Rehabilitation Act of 1973 outlawed discrimination against people with disabilities in certain respects. Section 504, however, only applied to facilities that received federal financial assistance, according to a DOJ spokesperson. Thus, the ADA greatly increased protection for people with disabilities in areas like access to transportation and public buildings, such as stadiums. But even today, only one percent of overall seating needs to be wheelchair accessible in order to comply with the law. And at venues with over 300 seats — Chase Field has a capacity of 48,519 and USAC can hold 18,422 — wheelchair seating must be available in more than one seating section.

Both organizations recognize that beyond minimum standards, there are many other ways to foster an inclusive and welcoming space for guests with varying abilities. One of the key people helping to achieve this is Nanette Bowles-Odell, Ed.D.

Nanette Odell serves as ADA Coordinator/Disability Services Manager for both locations. Despite working in the disability services field for what she jokes has been “kind of my whole life,” landing in the sports world was simply coincidental.

“I think God has a sense of humor,” she told me with a laugh.

Before being hired in her current position, Odell had her own business providing disability awareness training and consulting. Prior to that, she was the Disability Advocate with the City of Surprise. She admits that working in sports — even after three and a half years — has not turned her into an aficionado.

During her interview for this position, Nanette recalls explaining, “Please know that I’m here not because I can’t wait to see the players. I’m here because I want the people who are really into sports, and who happen to have disabilities, to have absolutely full and equal access to that, the way everyone else does.”

Given the nature of her work, a deep sports knowledge is not actually necessary.

Odell explained that because USAC was built before the law went into effect, more modifications to seating areas and other amenities were required there than at Chase Field, which was constructed with ADA regulations in mind.

Eight of their accessible seating sections allow fans to keep their mobility devices with them during events. Guests requesting a sign language interpreter for a concert or show are seated above the platform, with the interpreter occupying a corner of the section’s lower half so there is a good line of sight.

Odell works with community partners, like Valley Center of the Deaf and Arizona Commission for the Deaf and Hard of Hearing, to inform the larger community about an upcoming event for which there will be interpreters present. Because special arrangements need to be made to reserve the seating in these areas, guests needing an interpreter are encouraged to contact Nanette as soon as possible. As soon as there is a request for interpreters, we take the opportunity to market it as an “interpreted show” and set aside seats in the area with a good view of the interpreters. This January, for example, Disney on Ice will present eleven performances of “Frozen” at USAC, four of which are already being promoted in this way.

The Suns are also utilizing current technology, offering a smartphone app for fans with hearing difficulties that provides closed captioning during games, while the Arizona Diamondbacks display these announcements on their giant video board. Robin Smith, Coordinator of Disabled Guest Services with the San Diego Padres, says his team offers a similar option for closed captioning of public address announcements via MLB’s “At the Ballpark” app.

“At our Guest Services centers, we have assisted listening devices. We also have iPod Touch units that offer the public address feed in text form,” Smith explained. Smith also indicated that in addition to more traditional ADA accommodations, the Padres provide courtesy shuttles for fans with disabilities from a variety of parking locations both before game time and after the last pitch.

Certain needs still might not be completely met by all of the available in-stadium accommodations in Phoenix. To that end, earlier this year, the Suns partnered with Valley-based nonprofit, PAL Experiences. A short narrated and captioned video walks people with autism and other similar challenges through what it’s like to go to the game, from entering the arena to the end of the night. A similar video is being planned with the D-backs.

Russ Amaral, the Vice President of Ballpark Operations at Chase Field, has worked with the Suns and Arizona Diamondbacks, and has held his position for 18 years. When USAC opened in 1992, he remembers the genesis of an ADA advisory committee for the Suns, which still exists today. It initially focused on things like “parking, ticketing, seating, concessions [and] restrooms,” and is comprised of people with and without disabilities.

“It was very important to each organization to ensure that our facilities would be open, welcoming, and accessible to all guests,” Amaral added.

Hiring Odell was a positive step in this direction as well.

“Nanette’s efforts have been tremendous for both organizations. We are very fortunate to have her with us, and I’m very excited to think of what we can continue to achieve in the years to come,” Amaral wrote.

Odell feels fortunate she’s been able to impart her knowledge about stadium and arena accessibility at the National ADA Symposium, International Association of Venue Management and for the MLB Summit. While her audience is not always comprised solely of pro sports personnel, she’s been honored to share ideas with people in similar positions with other MLB teams, such as Billy Langenstein of the Washington Nationals and Smith, of the Padres.

Langenstein, Director of Event Operations for the Nationals, explained the symbiotic partnership his team shares with their counterpart in Arizona.

“Our relationship with Nanette and the Arizona Diamondbacks is great,” Langenstein wrote in an email. “Throughout the season, including our yearly MLB meetings, we share best practices and updates within the industry to help one another.”

Odell plays a large role in the accomplishments made toward disability inclusion at both venues. But she also gives credit to her organizations for advancing these efforts.

“I hope almost everything we’re doing will be a model,” Odell said. “I feel very fortunate that both [teams] take the ADA seriously. We couldn’t have made the strides we have or affected such positive change without the dedication of the Suns and D-backs.”

To learn more about the disability-related amenities at Chase Field and US Airways Center, go to www.PHXsportsADA.com.

On Sunday, June 7, the Arizona Diamondbacks hosted the fourth annual D-Backs Disability and Human Services Expo at Chase Field in Phoenix. Throughout the course of the day, the team welcomed over thirty exhibitors to the stadium. Among the organizations in attendance were Arizona Bridge to Independent Living, the Down Syndrome Network of Arizona, Southwest Autism Research and Resource Center and Arizona Disabled Sports.

Nanette Odell, ADA Coordinator/Disability Services Manager for the Arizona Diamondbacks and Suns, says this is one of the many ways that the organization shows support for the community of people with disabilities in the Valley.

“The exhibitors were here to provide resources and information, answer questions and increase overall awareness.”

In addition to the various companies and organizations represented, the D-backs’ game against the Mets also featured a few on-field appearances by guests with disabilities, including sixth grader Willow Herbold from the Phoenix Day School for the Deaf, who signed the National Anthem. Six-time gold-medal-winning Olympic swimmer Amy Van Dyken delivered the ceremonial first pitch. Van Dyken attended the University of Arizona for two years and was a member of the Wildcats swim team.

Van Dyken sustained a spinal cord injury after an ATV accident one year ago. She now serves as a broadcast analyst for Pac-12 Networks swimming coverage and started a foundation in her name, which works to provide resources and medical equipment to people with spinal cord injuries.

Former Arizona State Sun Devil baseball player Cory Hahn was also on hand during the event. Hahn, a standout high school player in California, chose to play at ASU in 2011 and sustained a spinal cord injury during an early-season game of his freshman year. Two years later, in June 2013, the Diamondbacks drafted him in the 34th round. He now serves as the team’s assistant to the Head of Scouting.