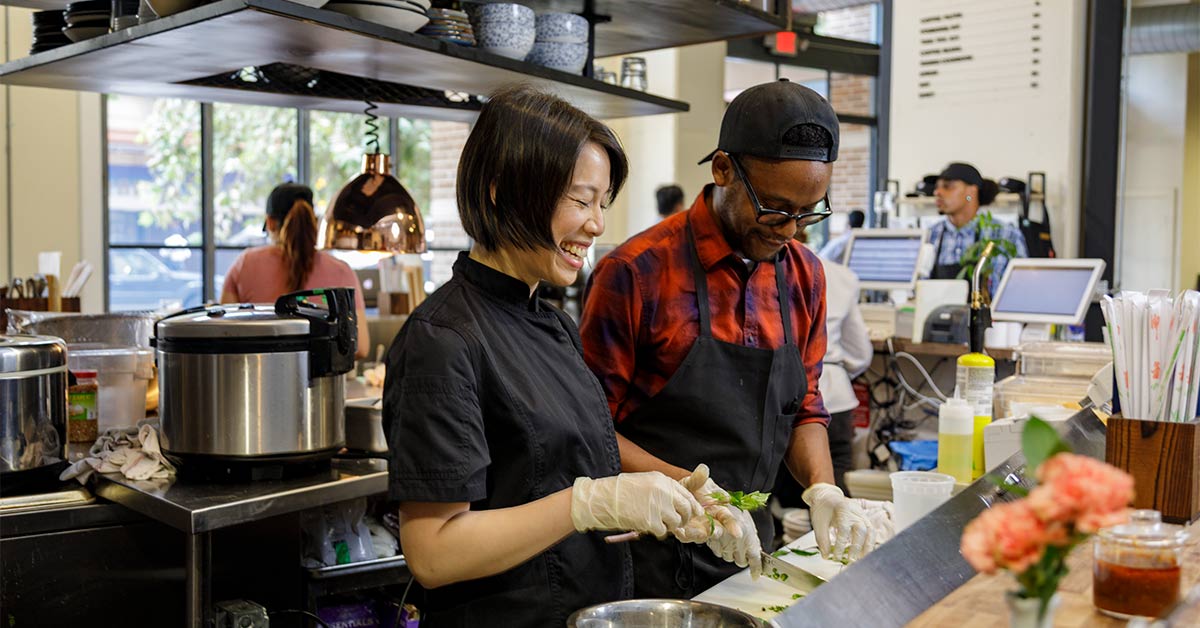 The Blind Goat owner on imagination, disability and authenticity

When I open my laptop in the airport at 5 a.m., 20 episodes of “MasterChef” season 3 start playing simultaneously at full volume; the terminal is haunted by the furious voice of Gordon Ramsey.

I scramble with my headphones and close each video in shame, except one—the one famous for the scene from season 3, episode 5.

Christine Hà, the first blind contestant on “MasterChef,” presents an apple pie to Gordon Ramsey. She’s the last one to be judged, and worried. Pie isn’t her forte, and Hà expects to be eliminated.

“What do you think this pie looks like?” Ramsey asks her.

Hà looks down. “I think it probably looks like a pile of rubbish.”

He goes on to describe her pie—the brown crisp of the crust, the glaze of the sugar. At one point, he scrapes a knife across the top so Hà and the other contestants can hear its texture. The celebrity chef, known for his fiery critique, softens his voice.

“You’ve got to start believing in yourself more, okay?” he says. Hà nods and begins to cry. Soon, other contestants watching from a distance cry, too.

Ramsey takes a bite, and the flavor’s amazing. Hà stays in the competition, passing round after round until finally winning the MasterChef title in 2012.

Since then, she released “Recipes from My Home Kitchen,” her cookbook of Asian and American comfort food; guest-judged on both “MasterChef U.S.” and “MasterChef Vietnam;” traveled worldwide as a speaker and chef; served as a culinary envoy of the American Embassy and blogged it all on her website, “The Blind Cook.”

In 2018, Hà announced that her first restaurant venture, The Blind Goat, was underway. She started a YouTube mini-series with her husband, John Suh, to document the process, and by the time I flew to Texas to visit during the restaurant’s soft opening, I had watched them deal with everything from paperwork to construction.

But there was more to Hà’s story than any research could reveal.

Bravery Chef Hall is new and unmarked. But once you find it, you’re rewarded with five restaurant concepts inhabiting the same space—The Blind Goat among them.

I recognize the station’s jade blue tiles from the vlogs and seat myself in a wicker chair by the counter, watching workers weave past each other with bundles of greens, chopped sugar canes and steam baskets.

While waiting for Hà, I’m handed a copy of the soft opening menu and order “G.O.A.T. Curry.” It’s based on Vietnamese chicken curry, but uses goat sourced from a local ranch. The name is a play on the restaurant’s namesake animal (Hà’s zodiac sign) as well as the acronym for “greatest of all time.” Served in a china bowl, it evokes an unmistakable nostalgia—this was a meal you had at your childhood friend’s house after barely making curfew.

I also jump at the opportunity to get fresh sugarcane juice, a Southeast Asian staple tinged with citrus. LaCroix could never.

As I sip, soft taps of a cane approach from behind. Hà, sporting green rubber rain boots, is led by Suh. They check in with the staff, and when they separate, Suh retreats to a corner to work on his laptop while Hà feels her way around the counter’s perimeter until she reaches me.

Way ahead of you.

Hà begins with her parents, refugees who fled Vietnam on a naval ship just one day before the fall of Saigon. She was born in Southern California and grew up in Houston, an only child who spoke Vietnamese at home.

Like many immigrants, Hà grappled with cultural identity—too Asian to be American, but too American to be Asian. She would open her lunch box in school, wishing for the same peanut butter jelly sandwiches her classmates had, only to find her mom’s home cooking instead. For a kid who just wanted to fit in, she couldn’t help but feel ashamed.

She left recipes behind, and Hà returned to them to make things right, but anyone who has tried to replicate their parents’ dishes knows it’s almost impossible. There was always something missing, like a secret ingredient lost in time. It was a while before Hà, a perfectionist, realized an exact copy wasn’t what mattered—it was keeping her mom’s memory alive.

These were her mom’s recipes, yes, but they became Hà’s too. Peek at any online comment section about Hà, and you’ll find people who think she’s faking blindness because she doesn’t “look” it (whatever that means).

Hà started losing her vision in 2004 due to neuromyelitis optica, an autoimmune disorder that affects the eyes and spine. Medically, she is considered “counting fingers” blind at 10 inches in both eyes, seeing blurry fuzziness, contrasting color and shadow.

“It’s like after you take a hot shower and look in the bathroom mirror,” she says.

As Hà lost more of her vision, she learned orientation mobility (used to teach those with visual impairments how to safely, confidently and independently move in their environment), how to use a white, probing cane and how to navigate public transportation during grad school. Nowadays she gets around with the help of her husband, a friend or rideshare apps. Since her time on “MasterChef,” people have reached out to her saying her story helped them not only with disability, but other areas of life as well, like broken relationships, losing a job or the death of a family member.

What really helped Hà through the years was a good support system and the friends and family that create that network.

“They’re not gonna try to pretend and understand what you’re going through, but they’re gonna be there to offer support, a shoulder to cry on, a lending hand, or help you read your bills when you’re losing your vision,” Hà says. “A supportive community means everything to mental wellbeing.”

She thinks about what advice she would’ve given her younger self beginning to lose vision.

“You need to properly grieve your loss,” Hà says. “Whether it’s loss of independence, your vision, use of your limbs. You have to go through the proper motions of grief. At some point, you tell yourself that the world continues with or without you. You need to find a way to contribute to society. Whatever hand you’re dealt with, learn to play that hand to the best of your abilities. I would’ve never thought in a million years that I’d get a master’s in creative writing, or go audition for ‘MasterChef’ and win, or open a restaurant.”

“Even for a perfectionist like me,” she laughs. “And then you learn over time that things will never be perfect. You just have to roll with the punches and adapt.”

A group of fans surrounds Hà mid-interview, and I offer to take their picture. They’re ecstatic, excitedly switching between Vietnamese and English.

“Do you know her from ‘MasterChef U.S.’ or [MasterChef] Vietnam?” I ask.

As they leave, Hà tells me that although there’s actually a large Vietnamese population and food scene in Houston, she wanted The Blind Goat to showcase lesser-known dishes, like street and comfort foods.

“I lived in Houston most of my life, so I know what’s missing in the food scene,” Hà says. “And I learn more whenever I go back to Vietnam.”

In the restaurant industry, strategically executing a menu of that kind is its own challenge. Vietnamese food requires a lot of preparation, all of which is done in the confines of a 400-square-foot kitchen. For Hà, it’s an exhausting labor of love, mixing American and Asian concepts to create dishes that embody her identity and experiences. It’s a menu seen as inventive and narrative—she is a writer, after all—but also seen as inauthentic or non-traditional.

Sometimes, the inconsistency is unintentional. In her cookbook, one of her mother’s recipes uses Coco Rico, a coconut soda. While translating it into Vietnamese, the publishing house contacted her.

“They were like, ‘I find it strange that you use Coco Rico instead of fresh coconut water’ but growing up, that’s what my mom did,” Hà says. “It’s a result of being a refugee—it’s all she could find here.”

But for The Blind Goat, remixes are intentional.

One of Hà’s next concepts is making chips and queso. As a native Houstonian, it’s one of those ubiquitous dishes she grew up with. However, she plans to add Asian spices to the cheese and use wontons instead of tortilla chips. The result? A dish called “kê xô—” same pronunciation, just in Vietnamese.

“Here in America, there’s so much more to what we thought there was,” Hà says about these assimilation foods. “We can celebrate differences.”

Suh, who often helps Hà invent in the kitchen, recommends I try the “Rubbish Apple Pie.” It’s the famous pie Hà made for Gordon Ramsey, reformatted to look like a rectangular McDonald’s apple pie, but with pho ingredients like ginger and star anise in place of allspice. Topped with a caramel drizzle made with fish sauce, it’s flaky, savory, sweet and sells out often.

“I’m not authentic enough for some,” Hà says. ”But I’m authentic for me.”

Even with all the chaos of opening a restaurant, Hà still has personal plans. One of her smaller goals, she says, is another tattoo. Right now, she has three.

“My very first one I got when I was 18,” she says. “I won’t even talk about what that one was.” (For those curious, it’s a Chinese character she got after a bet with a friend).

Hà got her second one, a freehanded Japanese print, right after winning “MasterChef.”

“Garlic, cilantro and fish sauce, which is represented by anchovies—my favorite three ingredients.”

Her third and most recent one is on her wrist: a chef’s knife to signify her love of cooking and a feather pen for her love of writing.

But Hà has a fourth tattoo in mind, inspired by her mom.

“Her favorite song was ‘Imagine’ by John Lennon,” Hà says. “As someone who writes, someone who cooks, ‘imagine’ is a packed word.”

Imagine learning how to cook without vision.

Imagine being the first blind contestant to win “MasterChef.”

Imagine opening a restaurant in the city you love. Aitana Yvette Mallari is an online media journalist who runs on caffeine and WiFi. She’s lived in the Middle East, Asia, and both coasts of the U.S. and writes about health, tech, and amazing people doing amazing things. She is a graduate of the Walter Cronkite School of Journalism and Mass Communication and probably has a deadline to get to.