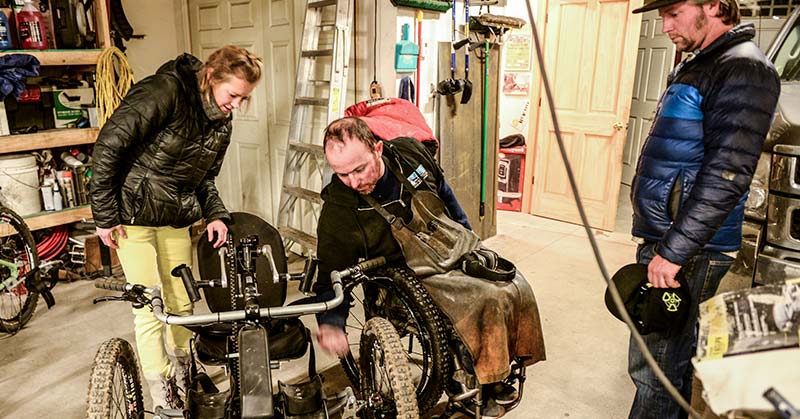 Missing his Time Spent Outdoors, Jake O’Connor Created a Career with Plenty of Time to Test his Products in the Wild

Situated almost 9,000 feet above sea level and surrounded by snow-capped mountains and aspen groves, it’s 7 a.m., 46 degrees and time to get to work.

“My commute is a lot easier in the summer,” Jake O’Connor chuckled as he wheelies across his loose gravel driveway on his way to his custom-built shop resembling a barn about 300 yards away from his home in Crested Butte, Colorado. The home he shares with his wife Meredith and newborn baby girl, Emelyn.

“I used to cut two-by-fours, now I cut steel tubing.”

ReActive Adaptations was founded in 2008 after O’Connor, who is a T12 paraplegic, tried some of the first off-road handcycles.

“They were really cool but I quickly realized that I could build something even better,” O’Connor said as he opened the garage door to his shop. He designs and builds off-road handcycles for a wide variety of disabilities–from spinal cord injuries to amputees and anything in-between. Most are hand-pedal, but then there’s the Stinger, a full-suspension recumbent bike pedaled by legs.

More recent are the adjustable handcycles for kids, “...since there’s nothing on the market for them and they want to go ride bikes just like all their A.B. friends,” O’Connor explained as he put on his welding helmet and rolled over to his frame jig that resembled more of a pig roaster than a traditional stationary jig.

“I’ve had to design some things in the shop specifically for me,” he explained. “I can’t simply stand up and change my position for welding, so I built this,” he pointed to the pig roasting contraption. “Now the frames swivel and I don’t have to.” 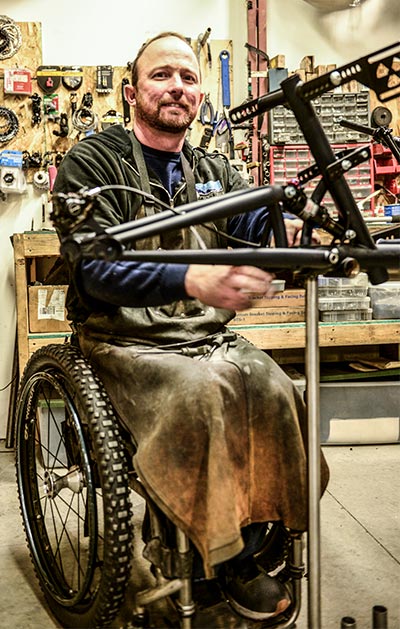 O’Connor slipped the leather apron over his grease-stricken jeans and a 90’s rock band t-shirt.

“I learned the hard way that when you’re welding and cutting in a wheelchair,” he looked at me with his eyebrow raised, “and you can’t feel your legs–”

“Enough said!” I chuckled, “The leather welder apron seems like a good choice.”

O’Connor’s projects are scattered around the shop. From full-suspension prototypes and fat bikes that fold down for travel to homemade monoskies and easy-load hitch racks for quadriplegics, the gears in O’Connor’s mind are always spinning, and his hands quickly follow.

“Off-road handcycles were a way for me to get back out there again,” he said lifting up his welding shield, “I love the mountains, fly fishing, taking the dog out, riding with my wife and all the other things they have to offer. It’s hard to access these places in a wheelchair, but on my Bomber [handcycle] I’m able to go almost anywhere I want.”

In fact, he’s often seen crossing streams or fly fishing on his Bomber handcycle that comes up to his knees or higher.

ReActive Adaptations has shipped bikes all over the USA as well as internationally. He was the first to design an electric-assist off-road handcycle that quadriplegics can ride (called the Nuke) and is continually innovating and making improvements. If O’Connor thinks he can build one better, he’ll try.

“The electric assist just makes it a lot more fun for most people,” he explained while pointing to a battery on a nearby cherry red bike that was being assembled. “Instead of being completely fried after five or so miles, people can ride 15 to 20 plus miles and actually keep up with their friends, family or whatever. There’s a lot of trails many people just couldn’t do without it.”

While there’s been significant growth in the off-road handcycle industry over the past few years, ReActive remains one of the only bikes that are exclusively handmade in the U.S.

As we finished up for the day, I asked O’Connor if he had any new products, he wished to tell us about coming down the pipeline.

“Well Kirk,” he said with a sparkle in his eyes, “With Emelyn here, it may be time to figure out how to take her riding with me.” 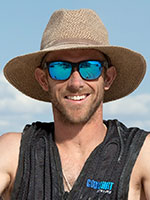 Kirk Williams is a quadriplegic adventure photographer and blogger who refuses to sit still. From Rugby to world travel, Kirk has tried it all. His most recent discovery is a love for Overlanding, where he is embarking on a trip to South America in 2019 in his custom outfitted 4x4 Campervan.