With more than 240,000 subscribers on YouTube and more than 157,000 followers on Instagram, Kaitlyn Dobrow is just that, an influencer. By creating authentic content that catches the attention of makeup-lovers from around the country, Dobrow has established a community of avid fans, or friends as she refers to them.

YouTube is home to hundreds of self-taught makeup artists. Each artist creates looks and styles that keep their viewers coming back. While other users may struggle to find uniqueness, it’s easy to see how Dobrow differs from her fellow makeup artists.

“After I got sick, that’s when I became obsessed with it … the first thing I held without an arm was a makeup brush. I made this contraption and put mascara on.”

With the help of Dobrow’s physical therapist, a contraption that looked like a large, blue tube with knobs in multiple locations was put together. The tube was fastened to Dobrow’s arm. It had many joints that allowed Dobrow to position the makeshift prosthetic at different angles. The tip of the tube had a piece of Velcro. Velcro was also fastened to Dobrow’s mascara. With the mascara firmly Velcroed into position, Dobrow taught herself how to apply makeup. 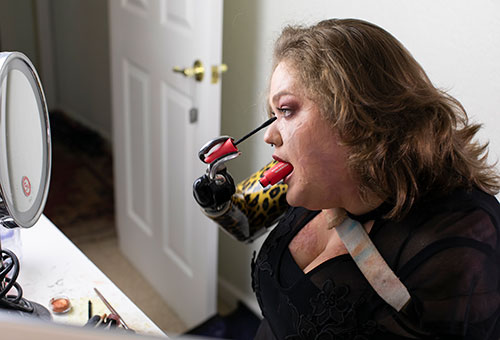 When Dobrow was 18, she contracted bacterial meningitis. Meningitis is an infection of the membranes that surround the brain and spinal cord. The infection stopped blood from reaching her skin and soft tissues, and Dobrow suffered the equivalent of third-degree burns. Within hours, the illness became serious, and physicians amputated her arms and the lower halves of her legs.

Dobrow wasn’t a makeup aficionado before she became ill, but as she prepared to leave the hospital, she realized makeup was something she’d be able to master.

Dobrow taught herself how to use a hook to apply mascara, foundation, highlighter and every other type of makeup imaginable. The hook isn’t dexterous which means Dobrow has to be creative in application. This creativity takes time; it can take Dobrow more than three hours to complete a look.

“A lot of them [makeup looks] are fierce. A lot of them are daring … I love watching them and like I’ve told her, ‘I want you to do my makeup,’” said Dobrow’s lifelong friend, Vanessa Gomez.

Dobrow was cautious about venturing into the YouTube world and she wasn’t alone.

“I was a little nervous because I was not really that familiar with YouTube,” said Don Dobrow, Kaitlyn’s dad.

While Dobrow and her parents may have been nervous about her future on YouTube, her friend Gomez was not. “The fact that she is so confident and the fact that she is so determined to do exactly what people are probably thinking, no, she can’t do that. She will prove you 100 percent wrong. She can do it.”

While the end goal is to make a living from YouTube, Dobrow loves the connections and friends she has made since she started sharing her makeup looks on different platforms. She and her family see it as a productive outlet for her creativity.

“I like the reaction she gets … people can see something in her … it’s just a great thing that she is sharing that [kind of] love with people,” said Don.

Dobrow hopes that the something people see in her is authenticity. That authenticity has led to two different posts going viral. One Instagram video garnered over one million views while a YouTube video gained more than 10 million.

Her mom is proud of the authenticity she sees in her daughter’s online content.

When Dobrow went viral, it was confirmation that YouTube is something she could indeed pursue and be successful. Her posts weren’t just for fun anymore. They were for her followers, for the community she’d created.

“It [the mindset] went to maybe I should post another makeup tutorial and try to be seen more,” Dobrow said.

To keep up with the demand for new content, Dobrow often spends 40 hours a week creating new videos. Filming can take her up to 12 hours for one video and editing often takes just as long. From beginning to end, Dobrow is a one-woman band.

Dobrow’s audience continues to grow and so does her status as an influencer. It takes a couple of virtues to create an internet influencer. A large audience and the power of persuasion. This persuasion often comes via the influencer’s authenticity and ability to connect with their following. Dobrow has an enormous online presence and according to those closest to her, she is as authentic as it gets both on screen and off. She’s a bonafide influencer. With every new subscriber, Dobrow gets one step closer to supporting herself financially with a career she loves.

Kade Garner is a Northern-Arizona native. When he is not hooked up to an IV filled with diet soda, he is probably filming an event, taking pictures of his dog or binge watching a new series. He’s an okay writer.