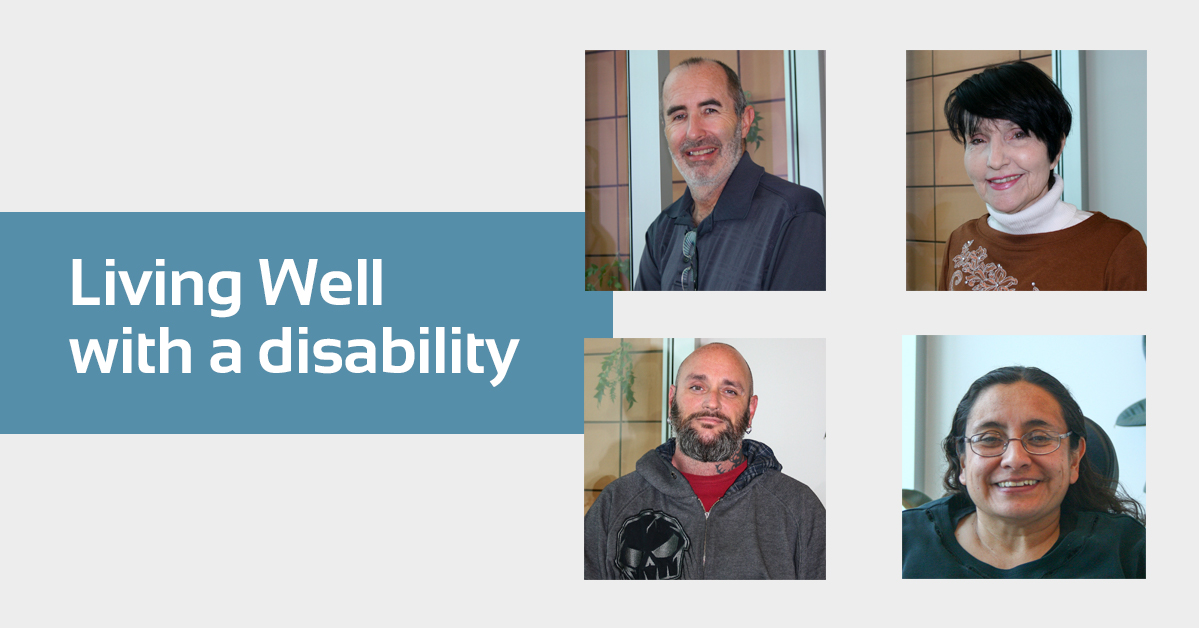 Living Well with a Disability is a health promotion and wellness course designed specifically to help adults with physical disabilities live healthy, meaningful, independent lives. The course covers a wide range of topics such as goal setting, problem solving, coping with depression and practicing healthy eating. Participants develop goals during the 10-week course, and use class exercises and discussion to help them break down their goals into manageable pieces.

Steve Norton, past participant and current class mentor, said he is grateful for the extraordinary impact the class has had on his life. When he first learned about the class, Norton was still living in a care home. “After my stroke, I was staring at four walls wondering what I would do with the rest of my life, but I knew I had a lot of life left to live.”

During class, Steve set a goal of living on his own. By the end of the class, he accomplished this goal, just 11 months after his stroke. Norton continues to use the principles he learned in the class to accomplish major goals. He plans to open a café and cooking school within the year, which will allow him to benefit others through his training as a chef.

Angie Montgomery learned about the class when she came to Ability360 to learn how to avoid living in a care home after being diagnosed with an unknown form of multiple sclerosis. She described attending her first class in an uncomfortable hospital wheelchair.

During class, she learned about a Wheelchair Skills class at the Ability360 Sports & Fitness Center, where she tried a more modern chair. “I didn’t know a real wheelchair could be so different. It was so much better,” she said. Since completing the Living Well course, Montgomery has increased her independence by getting a power chair and is beginning the process of learning to drive. “This class changed my life,” she said.

Doug Hocker particularly appreciated the resources he was exposed to in the class. He said learning to live with paraplegia has taught him that, “Having a disability means there is nothing constant but change.” Being in the class helped him meet others dealing with similar challenges. He learned about resources to adapt his car, which gave him a new sense of independence. “That’s the key to everything,” he said.

Ability360 subsidizes the Living Well with a Disability course through donations and marquee sponsorship opportunities, which are currently available. Socialization Through Recreation and Youth Transition Coordinator Leanne Murrillo has been instructing the Living Well with a Disability course for the last three years. “I’m passionate about finding funding for this because I’ve seen how the students can grow and change through it,” she said.

Kara Kahnke has cerebral palsy. She is a community advocate and holds a bachelor’s degree in journalism and master’s in counseling from Arizona State University. She has volunteered at Ability360 since 2012, and received Ability360’s Mentor Match of the Year award because her mentor partnership accomplished her goal of learning to cook independently. She plans to become a Peer Mentor at Ability360 to inspire others to self-advocate and live as independently as possible.