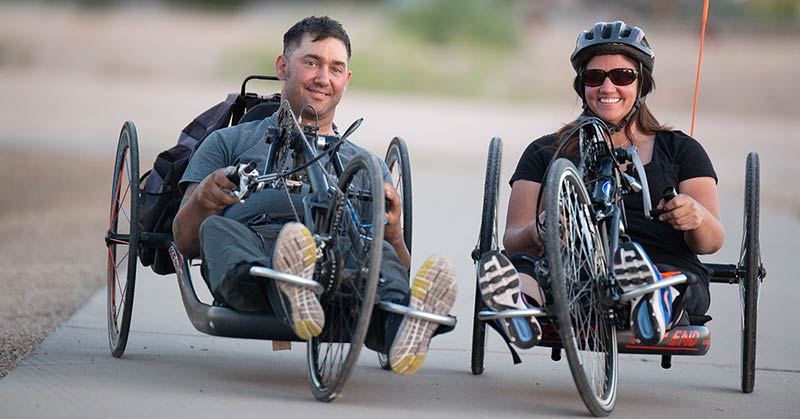 A Match Made in MySpace

The romance nine years in the making

Heather has bright blues eyes and a big warm smile. When she speaks, her voice is soft and friendly. Talking to Heather is like talking to an old friend. The conversation is easy and comfortable.

Heather lives with Muscular Dystrophy. In 2009, Heather was new to the MD community, so she turned to Myspace as a way to begin connecting with others who also live with MD and with people who live with other disabilities.

“I was getting into the disabled community and it was kind of a first for me, so I was kind of reaching out to a bunch of people just to get some experience,” Heather said.

There, she met Domonic. The two would become close friends. They stayed connected through social media, frequently speaking over the phone, and in March of 2017, Heather and Domonic would finally meet in person after nearly a decade of friendship. 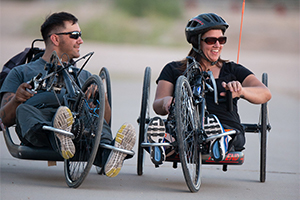 Domonic has tattooed arms and a muscular build. He could almost appear to be intimidating except he has a permanent smile and a laugh that is both fun and contagious. He has a great sense of humor and misses no opportunity to make a quick joke about himself. When Heather and Domonic are talking, they often look at one another as if anticipating the next opportunity to laugh.

Domonic has lived with paraplegia since he was 16 when he hit a tree in a car accident. ­­­­­­ He is passionate about sports, especially hand cycling. His drive for hand cycling led him to ride across China with a group he helped start, Cranking through China. ­­­The organization promotes awareness about disabilities (and equipment that is available to the disabled community) to Chinese towns and villages along the bike route.

Domonic made multiple trips to China as he biked the country in 500-mile segments. At the end of each segment, the group would mark where they stopped the 500-mile ride as that would be the starting point for the next trip, eventually allowing the group to cross the entire country.

Back in the United States, Heather was still integrating into the disabled community, but at a leisurely pace.

“I stayed away for a long time,” said Heather.

She was reaching out to others who live with MD but dissociating herself from the community at the same time. Heather needed time to both accept her new lifestyle and learn new skills.

Heather uses her wheelchair part-time. At first, she refrained from fully integrating herself into the disabled community because of her negative interactions with people who are non-disabled. Nonetheless, Heather learned to be patient with herself and with those who stare, ask personal questions and act awkward around wheelchairs. In fact, now she even encourages non-disabled people to ask the questions they may have for her. While Heather was learning how to adjust to this new lifestyle, one person remained a constant source of advice and conversation: Domonic.

Over the eight years that Heather and Domonic talked online, they learned that they shared much in common. They both grew up in the Midwest, believed in many traditional values and both love to be active. In fact, part of the reason Heather kept some distance between herself and the rest of the MD community for so long was her need to stay active.

Many doctors, and even other people who live with MD, told Heather that she should live a life that was as sedentary as possible to preserve her strength for as long as possible. However, Heather believed she needed to remain active in order to be happy and Domonic was someone who could relate. Heather does not suggest that others with MD try to live the same active lifestyle she has, but does want others with MD to know they can still lead an active life if they want.

“We’re told in the MD community to be sedentary and not use your muscles because it’s going to make them weaker quicker and again, to me, that’s just irresponsible to tell people.” Heather said, “For me, I got so depressed because I’m like, ‘I can’t do anything, so am I just going to sit here?’ To be able to go out and start doing things that everybody else was doing was important.”

“And there’s still such a giant stigma with MD that a lot of people who see me doing things… think I’m stupid for doing it,” she continued. “Hopefully when people see me they’ll think ‘Okay, I can do that too.’ It’s better than the alternative.” From Heather and Domonic’s conversations, it is clear that leading an active lifestyle is something they talk about a lot. The two made it clear that for them, creating a life that is full of quality, excitement and fun is more important than living a lifestyle that may give Heather a life that is a little longer, but void the joy being active brings.

Heather wasn’t aware of all the adaptive sports and activities that she would able to do. Her frequent conversations with Domonic began to take shape around these new activities.

The two began to speak frequently. They talked about their childhood, their values, but most of all, they discussed the different sports and activities that can be done in a wheelchair. Every time Heather and Domonic would talk on the phone, online or even in person, disability sports was the subject that drove the conversation.

Eight years is a long time to talk to someone online. Domonic was determined to finally meet Heather. In March of 2017, Domonic was working a booth for one of his sponsors at the Abilities Expo in Los Angeles. He invited Heather to come check out the show. After refusing his first offer, Heather finally decided to go after a friend convinced her.

After meeting in person, Heather didn’t need any more convincing. She and Domonic started dating shortly after this first in-person encounter. Their relationship was founded on shared values and principles but enriched by their mutual love for sports. Heather’s desire to remain active and Domonic’s passion for hand cycling soon meshed. After Domonic introduced Heather to the sport, hand cycling has become away for the couple to spend time together while being active.

The end of April was the beginning of a new chapter for the couple. Domonic and Heather moved from California to Arizona in search of a new lifestyle. They fell in love with Arizona before the move. They had friends who lived in the Valley and enjoyed the small-city feel.  They liked how affordable living costs were.

The transition to Arizona has been easy. Domonic was able to secure a job in the automotive industry and Heather takes care of her mother who lives with the couple. They feel like everything has just fallen into place for them during this move.

Heather just got a hand cycle of her own and the couple now plans on biking three to four times a week. Like any couple, life can be full of bumpy roads. However, these two always find a way to steer through any challenges they may face together.

“We always just find a way to make it work,” Heather said. 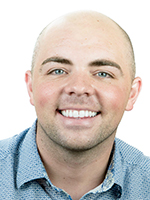 Kade Garner is a Northern-Arizona native. When he is not hooked up to an IV filled with diet soda, he is probably filming an event, taking pictures of his dog, or binge watching a new series. He’s an okay writer.