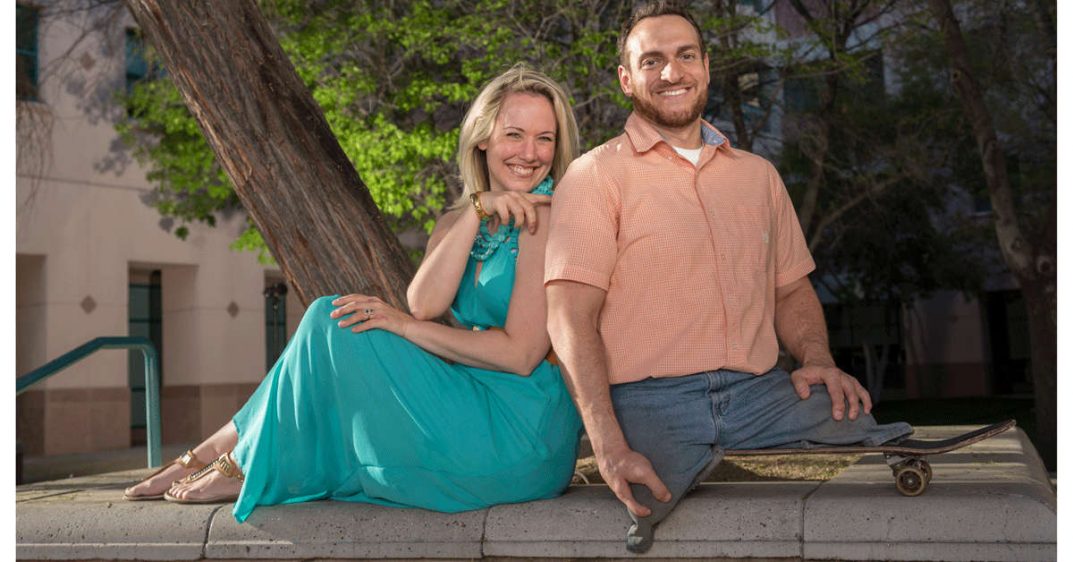 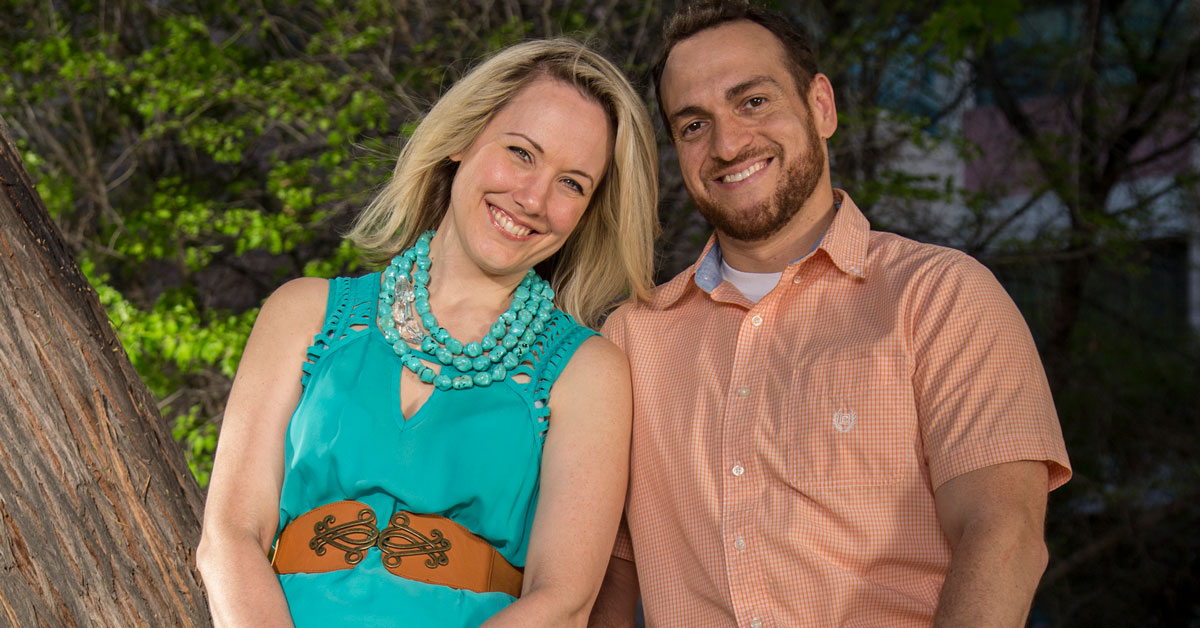 The Rock and the Kite

How Paco Torres and Emily Eldredge skate through life

We all see couples in public who turn heads – for many reasons. Starting with this edition, we’ll introduce you to couples who no doubt turn heads. Yet, beyond the curiosity is a deeper story of attraction, commitment, partnership and love. You’re invited to take a deeper look at their lives and relationships. If you know a couple we should profile, contact us.

She saw a young man running on his hands down the hall and knew she had to meet him.

“He was sitting in the waiting room area watching Ally McBeal,” Emily Eldredge said.“I just plopped down right next to him and said hi, but he didn’t even turn his head to look at me. He just kept his eyes glued to the T.V. and we had this whole conversation with him not looking at me at all.”

Pasqual “Paco” Torres confessed he didn’t look at Eldredge because he had just started dating his now ex-wife at the time and was nervous to be around another woman he didn’t know.

Torres was a patient awaiting prosthetic legs and Eldredge was a volunteer at Shriner’s Hospital in Los Angeles, Calif. Little did the two know this meeting would be the beginning of a lasting partnership.

Eldredge attended Torres’s first wedding in 2001 and remained in brief contact for the next eight years. They reconnected in 2009 through Facebook after their previous relationships ended.

“I have always been the person people could lean on when they are in pain, but there were very few people with whom I could do that,” Eldredge said. “One day I emailed Paco sharing all of the pain I was feeling around my previous relationship, not knowing if he could handle it. He replied with this compassionate response that as soon as I received it thought he could be for me what I have been for others.”

For the first time in their friendship, the pair connected on an emotional level. The relationship blossomed and the two were married on November 8, 2014.

“It was this instant ‘Wow’ where I felt we could support each other equally,” Eldredge said.

The couple credits disability as one of the main reasons they crossed paths. Torres was born without legs and only six fingers, four on his left hand and two on his right hand. Doctors labeled Torres a Congenital Amputee, meaning amputee at birth.

“When I was young my dad always said I was going to do everything just like a normal kid,” Torres said. “I went to a regular school my entire life and grew up doing whatever. I started doing my own laundry in third grade and learned how to cook by the fourth grade.”

Torres is less than four feet tall, but stands at about 5 feet 11 inches with prosthetic legs.

Torres prefers to use his skateboard to help him get around rather than his prosthetic legs or a wheelchair, unless he is playing basketball or rugby. From outsiders looking in, many may view the couple as unproportioned in size when they see the 5-foot-9-inch blonde walk hand-in-hand with Torres while he is on his skateboard.

“I personally like it better when he’s not in his legs because when he is he subconsciously worries about falling, so he has an emotional stiffness about him. When he’s not in them, he is much more relaxed and himself,” Eldredge said.

Torres wears his prosthetic legs to work, but takes them off as soon as he arrives home. The couple’s home has little to no adaptations. There is a black computer chair near the kitchen that Torres uses when he cooks and washes the dishes. Two stools sit in their bedroom for Torres to use to get to the counter and on the bed.

“When he was married to his previous wife, I used to make assumptions that she probably did things for him and took care of him, but there is nothing I really do for him because of his disability,” Eldredge said. “In fact, I even tease him sometimes and ask him why he uses the disabled parking placard because he has a skateboard and goes faster than all of us.”

The only time the couple run into disability-related challenges is when they’re in a large department store.

Torres also finds this challenging and has to look for her feet.

Individually, the two are very different. Eldredge refers to herself as the creative and more adventurous one and Torres is the more organized and dependable one.

Torres was a military baby and moved around constantly prior to the sixth grade. He has lived all over Arizona since. Torres graduated from Arizona State University and has worked for the federal government for 15 years in the Automated Litigation Support Services Department. He won Staff Employee of the Year in 2015 for his performance.

Eldredge could never grasp why Torres enjoyed so much structure in his work.

“It finally took him yelling at me saying, ‘I like my job Emily! I like that I know where I am going to be at 8:30 every morning and I know what I’m going to be doing!’” Eldredge said.

Originally from Dallas, Texas, Eldredge started her own business as a speaker and executive coach for people in leadership positions. She travels across the world to help leaders identify their weak points and transform them into better human beings. She has spoken at conferences for the United Nations and is currently writing a book about her techniques.

Torres calls the two of them the rock and the kite. 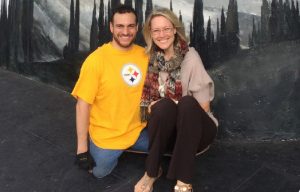 “The rock does what the rock does and the rock is always going to be there. The kite can do whatever it wants to do,” Torres said.

Outside of work and every-day life, the couple spends time with Torres’s two daughters making arts and crafts, going to rugby tournaments with the University of Arizona Wheelchair Rugby team, and traveling the world.

“Traveling with him is more fun and exciting because of his disability. For example, we went to Versailles, it’s all stairs,” Eldredge said. “They don’t have any elevators available
to the public, but security guards would see him on his skateboard and would take us through these back corridors to get to secret elevators.”

Torres was always hesitant to travel before the pair started dating, but he has since been bitten by the travel bug.

From the outside, the couple might seem dysfunctional, but their differences balance each other.

Angeline Carbajal is the Program Coordinator of Communications at the UA Disability Resource Center. She started as a student worker for the DRC her freshman year and graduated from the UA in May 2015 with her bachelor’s in journalism. She hopes to pursue a graduate degree in marketing starting August 2017.