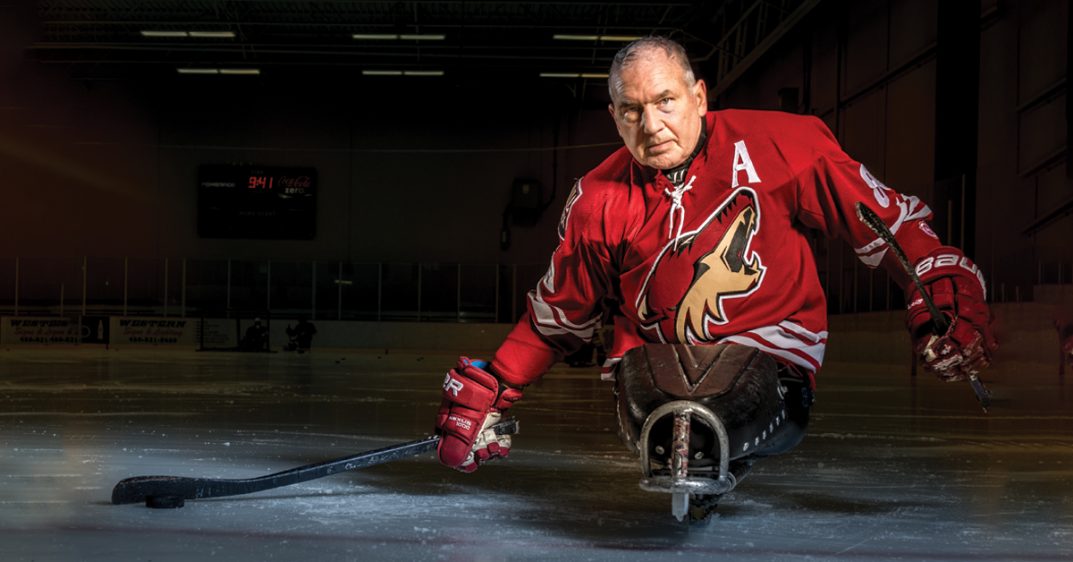 Hot Off the Ice 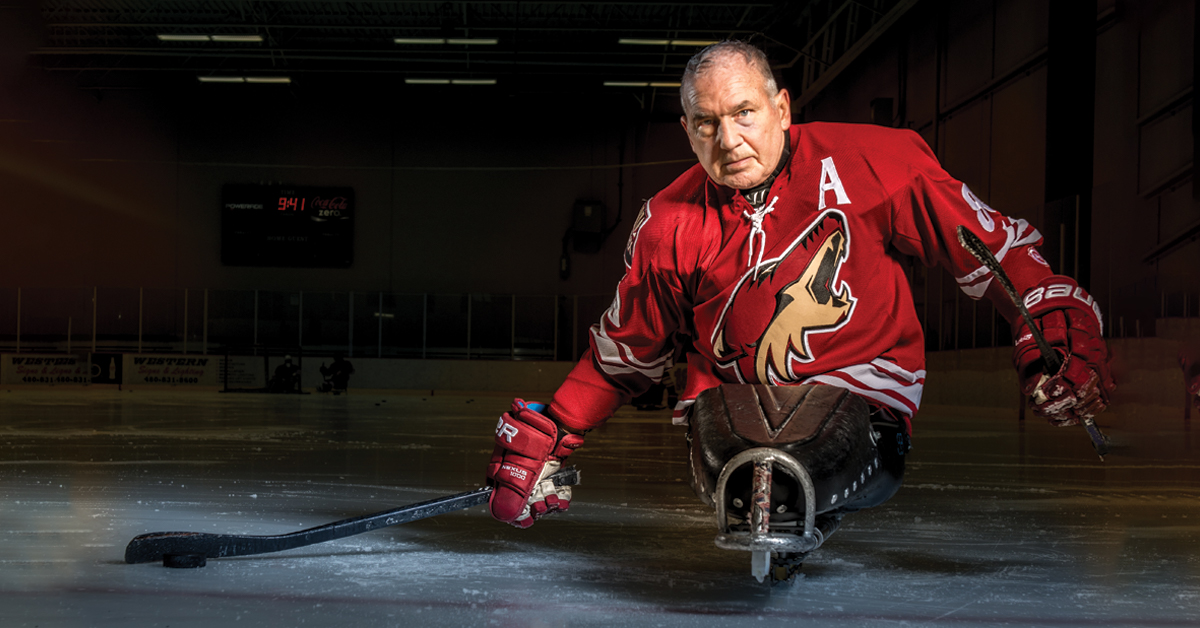 For Tom and Sharon Lopeman, life in Prescott revolves around sled hockey.

At 72, Tom is the oldest member of the Phoenix Coyotes Sled Hockey team and the teammate that travels the farthest – 220 miles – to and from practice in Scottsdale.

After a stellar high school football and pole vaulting career in Bellevue, Ohio, Tom earned a football scholarship at Eastern Arizona College and later one for the
University of Nevada at Reno.

But before he could get to UNR, he was drafted to the U.S. Marines and sent to Pearl Harbor. There he married his high school sweetheart, Sharon Bykerk. In 1969, three months before the end of his time in the Marines and return to Reno, Tom was in a head-on motorcycle accident.

“Football was out of the picture and my body has been under repair ever since,” he said.

Doctors treated 35 fractures. Six pins and numerous
skin grafts held together his left foot. Nerve damage affected his right eye and shoulder and a valve in his heart, which has now has been replaced three times with heart valves from pigs.

In 2000, doctors recommended the amputation of both of Tom’s legs.

“I’m provided with two artificial legs from Hanger Prosthetics and opportunities,” he said.

“The opportunity to enter the National Veterans Arts Festival and win five gold medals. The opportunity to attend the Disabled Veterans Winter Sports Clinic and discover fewer boundaries. The option to participate in water and snow skiing, kayaking, hand cycling and sled hockey. And the ability to be a volunteer pole vault coach at Prescott High School for 20 years.”

“A pole vault coach with no legs! How crazy is that?” Sharon Lopeman adds.

Sled hockey drives Tom today. Using roller skate wheels, he invented a device that lets him practice, usually by himself, at the roller hockey rink in Prescott. With hand flippers he created, he developed a water-resistance training regimen to strengthen the muscles he uses for skating and shooting. And a strict diet and vitamins lets him stay off medicines and be “as fit as possible to continue playing sled hockey.”

“I want to show the younger players they can play this sport for as long as they want. It’s all a mental thing. And I hope the Prescott VA, soon, can form its own sled hockey program. The key is to get sleds.”

The Arizona Coyotes have not, as of yet, brought the Stanley Cup to the desert.

But that does not mean there hasn’t been success on the ice for Phoenix.


“When we started out, it was pretty rough, but we improved at our own rate,” Team Captain Paul Crane said.

Sled hockey started in Arizona as a Phoenix Parks and Recreation Department program. In 2004, Phoenix’s Corbin Beu, Adam Conrardy and Prescott’s Tom Lopemen went to a winter sports clinic in Aspen, Colo. When they returned Beu, Conrardy, Lopeman and others began organizing the team and looking for sponsors to buy equipment and cover ice rental and tournament fees.

The 15 men and women on the Coyote roster have some form of physical or mental disability. Rules allow teams to have up to two members without disabilities so long as they play in a sled. Teams may also have “pushers” to propel a teammate in a sled.

“Our team has really gelled,” Forward Guido Schmid added. “We’ve gotten to know each other and we have great chemistry. And the competition is absolutely getting better.”

The Coyotes play in the Pacific Sled Hockey league with the Los Angeles Kings, San Diego Ducks and Colorado Warriors. Each team hosts a weekend series of games spread
out during the season.

In addition, the Coyotes have competed in the Sled Classic in Coral Springs, Fla. in 2015 and in Nashville, Tenn. in 2016; the Disability Festival in San Jose, Calif., in April 2017; and the last two years hosted the USA National Women’s team for exhibition games at the Ice Den.

For the 2017-18 season, Crane said the Coyotes plan on attending the Sled Classic in Minnesota in November, travel to Colorado Springs in January and Los Angeles in February, host the PHSL in March and compete in the Disabled Festival in Chicago in April.

Scott W.L. Daravanis is a graduate of Indiana University and has worked in television, radio and newspapers. Scott has been a reporter/photographer, Managing Editor, Associate Editor and City Editor for weekly, twice-weekly and daily newspapers. He plays sled hockey and enjoys photography. Scott and his wife, Amy, reside in Prescott Valley. He has one son, two step-daughters and four step-grandchildren.