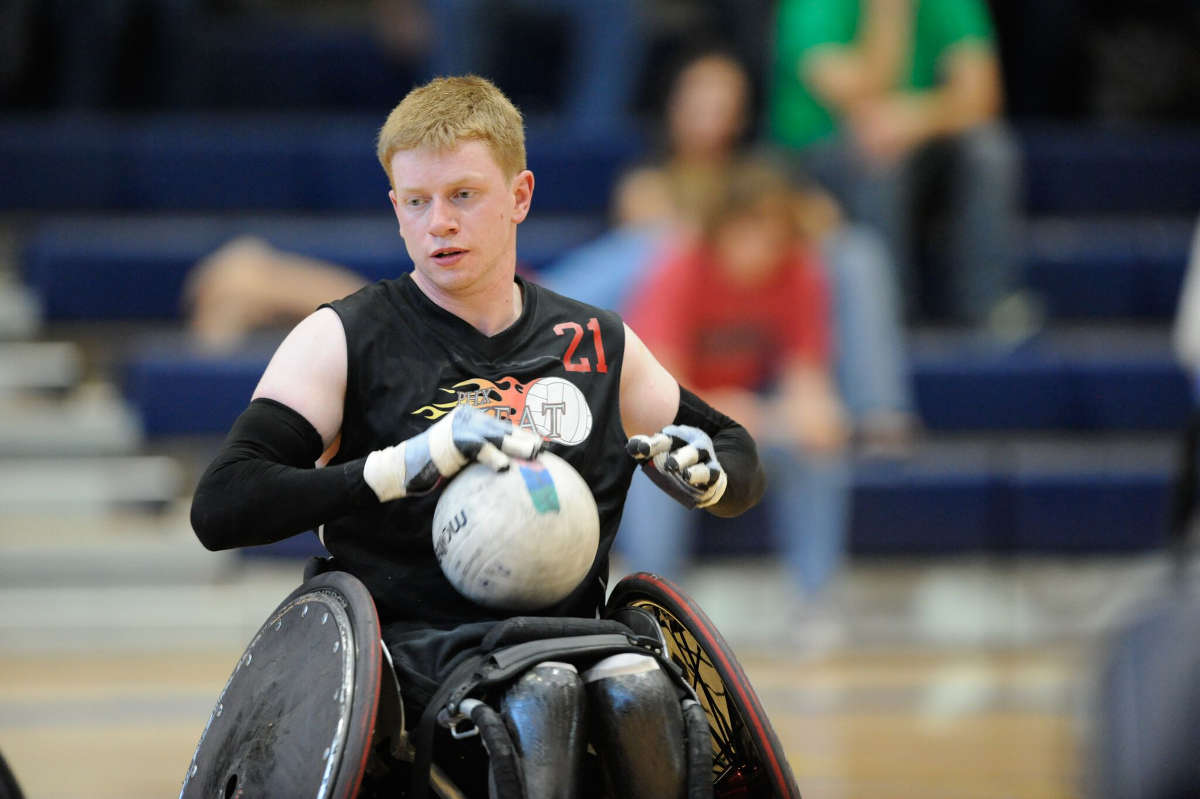 They say that the wind blows hardest at the top of the mountain. But after capturing back-to-back Division I rugby titles this season and last, there is no place where the Phoenix Heat wheelchair rugby team would rather find themselves.

The season came to a close this past weekend in Louisville, Ky. and despite a couple of rough patches during the year, the Heat once again claimed the sport’s top spot, after entering as the tournament’s Division I number one seed. A clean sweep of the competition resulted in Phoenix’s successful defense of its championship trophy, and they will look for a three-peat next year.

With a ten-point victory over Tucson, the Heat managed a 5-0 showing in Louisville, winning each of their contests by an average of just over 17 points. Two of the most challenging matchups proved be be against Tucson and Minnesota — both squads who found the formula to beat Phoenix earlier in the year.

Katie Ritter is the team’s assistant and all-around team liaison. She travels with the Heat and provides support for the team during games, practices and scrimmages. From helping with taping gloves and fixing flat tires, to getting the players back on their wheels when they fall, she has been working with Phoenix since 2013.

Ritter says that losing to Minnesota this past November was an unexpected turn of events for a squad that had become so accustomed to sustained levels of success.

“Last season, we were undefeated and never lost a game. So we got used to that,” said said in a phone interview. “It was just a strange feeling that ‘this isn’t happening… this isn’t real.’”

Eventually, the team grew to realize that they were just that: a team that, sooner or later, had to admit their first defeat and find a way to emerge stronger. Collectively, the group came to the conclusion that the only option was to move forward and to identify the weak points Minnesota had exploited. Ritter explained that after that first defeat, falling to Tucson later in the season was still difficult, but not devastating. Instead, it simply afforded another opportunity for the Heat to test its mettle.

“The guys took that and they motivated themselves; if they don’t want to lose anymore, they made sure that didn’t happen,” she said. “So, it drove them to train harder, to push harder, to figure out what went wrong and fix it. And they did.”

Joe Delagrave, co-captain for the Heat and USQRA’s Division I Player of the Year explained that the competition was even more challenging throughout the club season this year. He admitted that losing a game or two can have it’s benefits.

“This year, pretty much every Division I team had [an international player]. Every team was bulked up and ready to compete with us,” he said. “You don’t really like to lose, but at the same time, I think losing really helped us kind of reflect on what we can work on as a team.”

To that point, Delagrave and Ritter both made clear that Phoenix’s most recent accomplishments are due not only to the bigger name stars like Scott Hogsett and Nick Springer — both multiple-time Paralympians — but to the whole roster from top to bottom. For some who follow the club rugby season at the Division I level, it can be easy to focus solely on the players who attract the most ink in stories like this one. But without the rest of the squad, Delagrave said, there is no championship in the Heat’s trophy case.

“There are a lot of guys on the team that stepped up, like Joe Jackson and Jake [Zunich]. And there are guys who have been around like Dave Corbett,” Delagrave said. “It takes eight of us to scrimmage, and those guys probably get left out of the spotlight, but they work their butts off, too.”

Another key to Phoenix’s winning ways has been the consistency of their roster. Jim Roberts, who joined the team last season as an international player from the U.K., returned for his second season in the desert, and Delagrave, Hogsett, and Springer have been playing together for six years. Add in Joe Jackson and Ernie Chun, and the core of the team has remained relatively stable over recent years.

“The chemistry there is undeniable. From not having to talk to the other person [for a play to work on the court], or knowing what they’re thinking, that helps,” Delagrave said.

“The camaraderie is a huge part of [our success]” Ritter explained. “Blood or not blood, they’re all brothers, and we’re all family.”

For this family, being able to joke around and be sarcastic with each other, even when you wouldn’t expect it, also helps loosen things up during a long season and lessen the likelihood of any spats between “siblings”.

“Even during games, you know, it’s okay to not be so serious,” Ritter said. “It’s helpful that we are focused on winning and on the game. But then we’re not afraid to have some fun in the process, which is nice.”

Going into next year, Ritter says that the team understands what lies ahead and how much greater a challenge it will be to remain best in the country.

“Oh, they’re coming for us,” she said, of teams like Tucson, Texas, and Minnesota. “We know. I feel that we have set a level — not only for [other teams] but for ourselves — that there is no other option but to train and to be motivated and get better.”

In addition to being named Player of the Year, Delagrave also was named to the All Tournament team as the best 2.0 player. Hogsett was named best at the 1.0 classification, and Roberts took the distinction of the tournament’s Most Valuable Player in Division I.

Chris Carr is an independent journalist based somewhere in Arizona or California but for sure in the nearest coffee shop. Chris has a masters degree from the Walter Cronkite School of Journalism at Arizona State University.