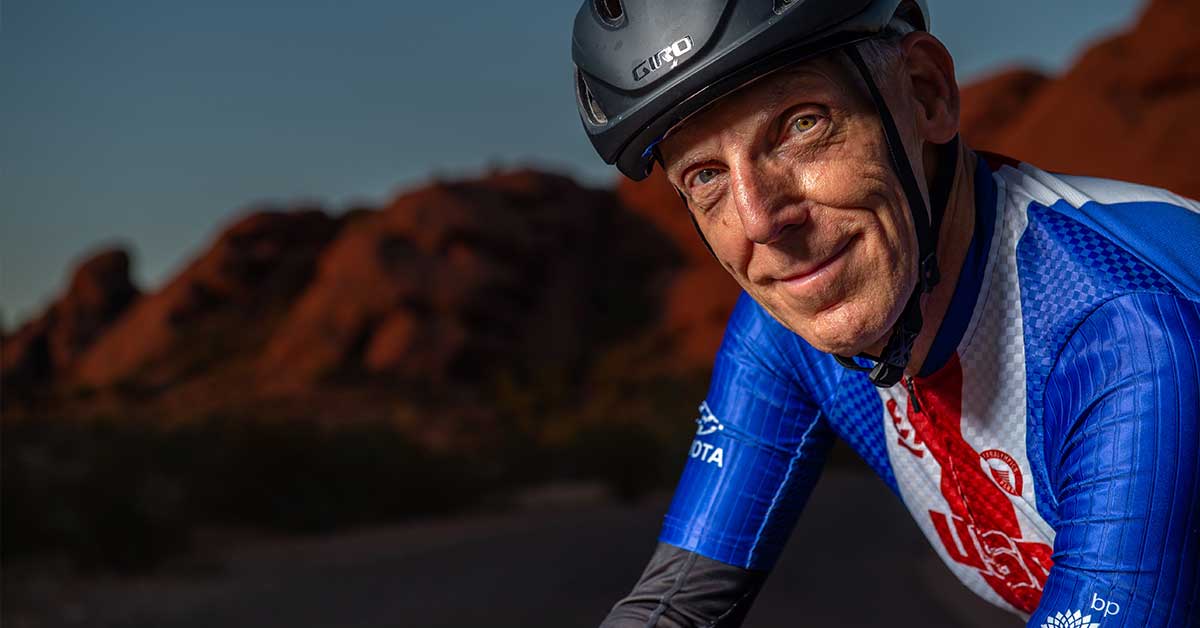 At age 58, Arizona cyclist Todd Key is striving to make Team USA and get on the road to Tokyo

Then ask para-cyclist Todd Key what winning feels like.

To Key, winning is a little different, surpassing the simple binary structure of victories and defeats. Winning knows no boundaries. Winning breaks through barriers, stigmas and is devoid of any prosthesis.

Since his international cycling career began just seven years ago, he’s amassed 17 national championships, a top-ten world-ranking in road cycling, and a top-15 world-ranking on the track.

His career, albeit brief, is one that any cyclist would be incredibly proud of, let alone a 58-year-old.

For Key, it’s always been about that little dose of freedom.

“Once you get on that bike, the freedom is complete,” Key said. “You have this whole other ability of speed that’s just not available with prosthetics, even [for] runners.”

Key speaks about the freedom cycling affords him with infectious energy. Grinning and candid, his eyes almost glazing over as he narrates his triumphs.

His grin widens a bit more as he recalls moments that he’s stunned two-legged cyclers, or the “normies” as he affectionately calls them, with his speed as a one-legged rider.

“When I’m riding, there’s no one–there’s no two-legged person on a bike–that can get away from me on a downhill. Not Lance Armstrong. No one.”

“Most people are blown away when I ride away from them. They never see me again,” Key said, a smirk on his face.

Born in Chicago, Key was just seven when he fell out of a tree, resulting in a compound fracture in his right hand. The tendons in his forearm and hand became infected shortly thereafter, and he lost the functionality of the hand.

Key described himself as “troubled,” and began smoking marijuana. At 15, his parents decided to send him to a private school in Wisconsin with the settlement money they had been awarded from the hospital who mistreated his injury.

“I remember coming home, and my parents had decided it was a good idea if I were to help them run insulation in the attic,” Key said. “They weren’t even like ‘you should get some knee pads’ or something. It wasn’t a finished attic either so I just had to crawl around on the beams all day [and lay insulation].”

Fiberglass insulation in the ‘70s and ‘80s was often made up of large shards of glass.

It was that first night after working that he put two and two together, pieces of fiberglass had gotten into his knee. But Key ignored the intense pain and swelling, instead opting to not tell anyone for nearly a month.

“It got to the point that I couldn’t even bend it and the pain was all the time,” Key said.

By the time he saw a doctor, he ended up being rushed to a hospital where he was told he had carcinoma in his right leg. Doctors amputated above the knee.

Key was just 17. He spent the next 18 months being treated with chemotherapy and was then fitted with a prosthetic leg.

It was in engineering school that Key met Bruce Braley, who was an avid bike rider.

“I never introduced him to cycling with the thought that this is what he would do forever,” Braley said. “It was just something else to go do. We’d hang out or go for a ride.”

Key had to make numerous modifications to his bike that would allow him to pedal with just his left leg and use the front and back brakes with his left hand, but it was his first taste of that freedom. 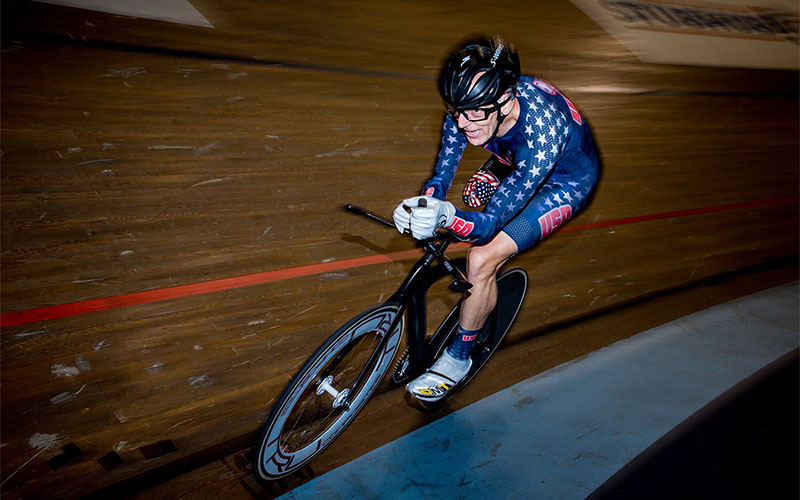 “I quickly discovered that every time I rode to class, anyone who was on a bike, I would just destroy myself to go past them as fast as I could.”

But riding his bike for longer than 30 minutes would become painful. Key began tinkering with his set-up once more, working to shift his weight off the seat. He also added other functional adaptations, to the handlebars, brakes and pedals, but quickly became frustrated with the lack of solutions.

That’s when Key’s history of drug usage found him once again. His neighbor was dealing drugs and finally Key caved and tried “everything,” but only one gave him that feeling of euphoria: meth.

“But it’s not really the kind of stuff that you can do every other day.”

Although drug addiction consumed him, he still managed to excel academically.

Until one day he found himself broken down near Wickenburg, Arizona waiting for his girlfriend at the time to show up.

After two days of waiting in the broken down car, he had an epiphany. He was an addict and needed help.

He started walking back to Phoenix, stopping to call his sister in Birmingham, Alabama. She told him of a halfway house there in Alabama.

That was when Braley stepped in once more, offering Key a couch and a few weeks to figure things out. Ultimately, he bought a plane ticket to get Key to Alabama.

Key got sober and starting working for various car dealerships in Alabama before coming back to Arizona, ending up at a Porsche dealership in North Scottsdale.

He was sober and making good money as a car salesman, but he had started gaining weight. He decided the best way to get back in shape was on a bike.

It brought him full-circle.

He bought a bike and started riding it to and from work every day. It seemed that a dose of freedom had found its way to Key once again. But the same frustrations with the seat and handlebars resurfaced.

Key and those around him began to experiment with different seating options, like an angled, custom-padded seat. He also had a bike stem custom-made by a metalworking shop that was attached to a bike store.

Key borrowed an idea from a future teammate, Paralympic Cycler Allison Jones, and manufactured a carbon fiber socket that attaches to the seat post and cradles his leg. The socket gave him balance and leverage when cycling.

That little dose of freedom had finally become full freedom.

Key started racing around the country when serendipity hit. A metalworker from the bike shop in Phoenix ran into Key at a race in California in 2008.

“Same exact person who tracked down Allison Jones had been talking to this guy and telling him about you [Key] and he said you should do this Paralympic thing.”

Key went home, and applied to a Team USA Paralympic cycling camp. An acceptance email came back to Key quickly, and he hopped on a flight with a track and road bike.

“They were testing me on that bike ride. Just pretending it’s natural and racing up hills,” Key said. “And I thought, ‘No, you’re not dropping me. You don’t understand what you’re dealing with.’”

“So that was the beginning. Next thing you know I was buying more bikes. Going to track nationals. Going to world championships. Winning.”

Winning and transcending his athletic peak.

Typically athletic performance decreases as people get older. Research has shown that a typical athlete’s peak years are from age 26-31.

Key’s international career began just over 10 years ago, at 49. Ever since, Key has continued to work and to improve.

“We somewhat jokingly refer to his effort level as ‘Zone T.’ Within endurance sports, there are different zones of energy output, like one through five,” Greta Neimanas, Key’s cycling coach said. “And then way beyond that is ‘Zone T,’ and Todd is the only person that I’ve ever met who has consistently been able to just go straight there.”

The love Key has for cycling is infectious and genuine.

“Cycling fills that void that he was trying to fill with drugs,” Braley said. “It’s healthier. His addiction to meth was replaced with an addiction to cycling.”

Key’s chase has never been about winning–although he’s won quite a bit–it’s always been about freedom.

He enters 2020 as a Paralympic hopeful in a packed C1 category, working his way back from a broken femur that he suffered during a race in April 2019.

But if his history proves one thing, as long as he’s cycling, he’s a force to be reckoned with. 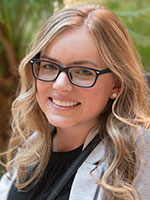 Kasey Kaler is a graduate of Gonzaga University’s Sport and Athletic Administration M.A. program and Arizona State’s Walter Cronkite School of Journalism and Mass Communication B.A. program. Kasey has a passion for producing content for a multitude of platforms and sharing stories to help people view differences as an asset.

Ability360 Power Soccer on the Rise