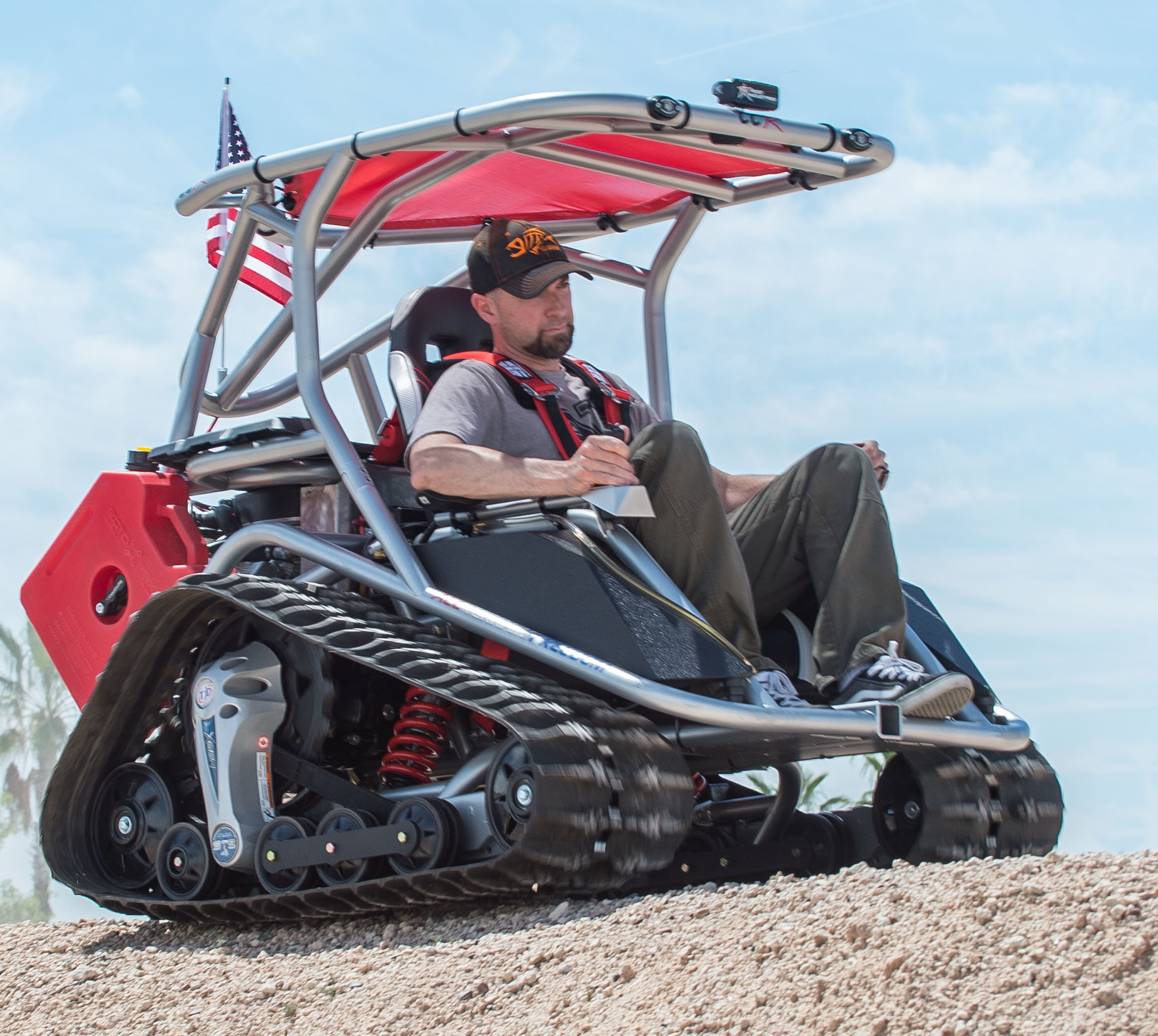 What gave you the idea to start developing the chair?

Long before I ever thought of making the CCR, I thought it would be cool to make a tracked vehicle for myself. Once I realized a need for something like this (more than just a toy for myself) with all the troops we have coming back with various amputations, I did a lot of research to see what was out there. It was clear nobody was producing anything extreme in that area, so “All Terrain Freedom” was born.

There are a few electric tank-style chairs out there, what makes the CCR by All Terrain Freedom different?

I have a passion for the form and the function, and when others sit in the CCR and feel the comfort of the seat and the inviting ergonomics, you can see it in their faces. I didn’t want a unit that incorporated your daily chair either. To me, that defeats the “freedom” aspect of it. Personally, I am a gear-head. I love the roar of an engine and the vibration of life when I turn the key. My desire for adventure won’t run out as soon as a battery pack would, so if I want to go further, I’ll just add more gas!

What has been the biggest challenge in developing the chair?

The balance of the unit, the controls, the safety, improving reliability and ease of maintenance have been some of the major development factors. Then there are the things that the end user never sees that need a lot of attention as well – like controlling the buildup of static electricity that is generated by the rotating tracks and tuning the NVH (Noise, Vibration & Harshness) that is created when just driving a vehicle – much like what the big car manufacturers go through.

Talk tech…Tell us about the engine, the tracks and the hand controls. Not many hand controls have been implemented to throttle a gas engine and maneuver a “wheelchair”. Was it a challenge?

We have been working with a giant in the hydraulics industry to develop an incredibly sophisticated system that is very easy to use. Our single joystick talks to an ECM (computer) that talks to the electronics built into the hydraulic pumps and they tell the wheel motors where to go. The engine RPM is usually controlled by a completely separate lever (dependent on disability) and used when you might want more speed or torque to climb something steep.

Tracks: 15” wide with 3” of travel in the fully independent suspension

Terrain: Made for deep snow, mud and sand, but rubber tracks also function on concrete

Did you borrow tech ideas from any other industries?

I have been in the racing industry since ‘97, mainly working as a mechanic/fabricator for all sorts of sanctions like SCCA, APBA, NHRA, SKUSA, AMA and others all over the US, Canada and Japan. I have been very fortunate to have worked for the best in the business when it comes to custom bike fabrication, race car engineering, aftermarket design and similar industries. Making things stronger, lighter, and faster is what I live for, and knowing the different forms of motorsport and taking a few ideas from each has been a big help. But it’s not always new tech that advances you; breaking lots of parts along the way is the only way to truly learn limitations and get better at design and function.

Who would you like to see using the chair?

Everybody! The CCR of course was intended for people with disabilities, but with or without, it is a heck of a lot of fun. I think this could be the start of a whole new genre in motorsports as well. The basic utility of a PVT (Personal Tracked Vehicle) is quite impressive, and with very little modification, the CCR could have a major impact on the military, snow removal, mining and many other industries.

What’s the next step? How do you plan to get the chairs manufactured?

Big picture, I would love to work with a large factory/manufacturer to get the CCR mass produced. There are many people with disabilities who would benefit from our CCR, and the scalability into the other industries would require much more than my shop can produce.

Learn more about the All Terrain Freedom CCR: