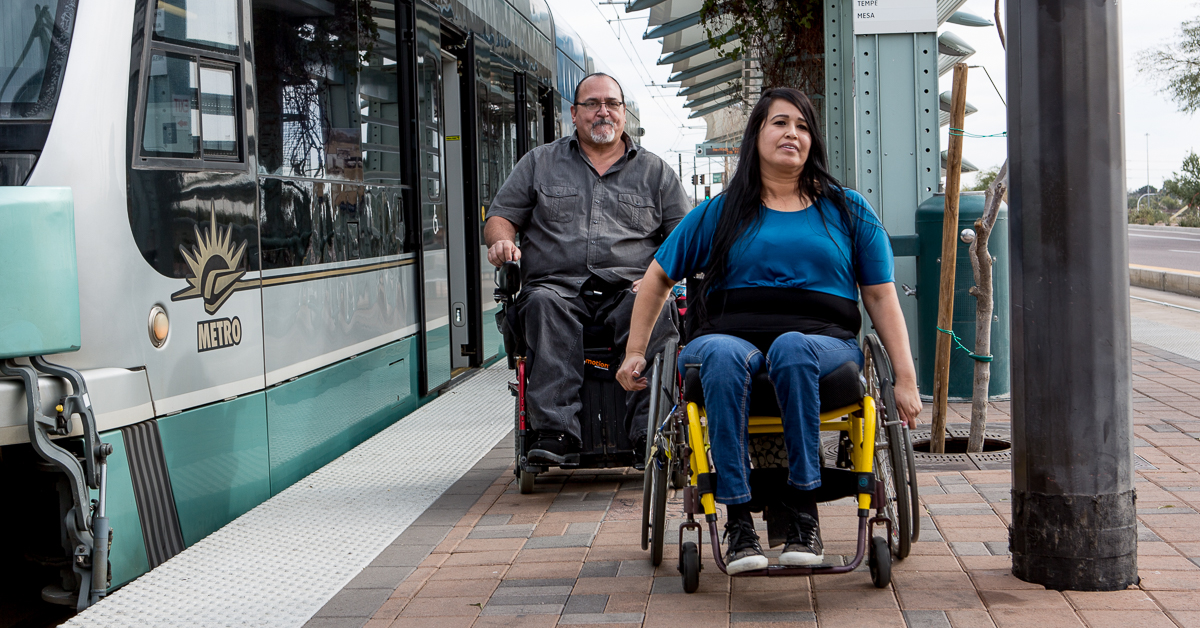 When construction of the Valley light rail system began in 2005, the Ability360 Center did not yet exist. The traffic it generates for the area at 50th and Washington streets was not part of the equation during the light rail planning stages. Opened in 2008, the Ability360 Center is a 62,000-square-foot universally designed, accessible and transit-oriented non-profit resources center serving the disability community in the Greater Phoenix Metropolitan area along with its 12 co-located partner organizations and conference center. Roughly 200 people are employed at this campus.

The Center grew again in 2011 with the opening of the 43,000 square foot, universally accessible Ability360 Sport & Fitness Center. This venue hosts many amateur sports events throughout the year that draws visitors from all over the world. Many of these individuals rely on public transportation from Sky Harbor to their local hotels and attractions as well as to and from the Ability360 Center.

Typically, more than 2,000 people visit the Ability360 Center each day.

On a crisp Wednesday morning, Phoenix Mayor Greg Stanton and Ability360 CEO Phil Pangrazio, joined by city leaders and community members, announced the first light rail project since passage of Transportation 2050; the 50th Street Light Rail Station. The project is expected to be complete in early 2019 with a price tag of $23 million.

In his remarks, Pangrazio stated, “This is a great day for people with disabilities in Phoenix and Valley-wide who have not been able to visit the Ability360 Center and all it has to offer.”

Noting the new station’s proximity to the Stockyards Restaurant and Tovrea Castle, Vice Mayor Kate Gallego said, “This new light rail station shows that everyone is welcome in our city, that we value inclusivity and recognize that public transportation is vital to our community.” Gallego, who co-chaired the MovePHX advocacy committee, cited students and members of the refugee community as benefactors of a robust transportation system along with people with disabilities.

Dig Studio won Mayor Stanton’s Innovation Games with their design concept for the new station which focuses on accessibility, rider comfort and safety. “When you make small moves and gestures to access, you get additional benefits,” said Brandon Sobiech, Senior Associate at Dig Studio. He pointed to shade structures that double as solar panels to power vending machines, ticket booths and cameras at the station. He also cited raising the road bed so that there are no ramps. “We have the opportunity to improve access for people who need it and at the same time allow smarter rain water collection so that it can be diverted to support surrounded landscape.”

This is considered to be the first project of its kind in the nation where an at-grade light system will create a new in-line station. This stretch of light rail along Washington Street from 44th Street to Priest Drive is the longest without a station.

Albert Santana, Phoenix Director of High Capacity Transit, pointed to the stations at 12th and 24th streets as similar traffic designs to the proposed 50th Street station. Santana has been working on the planning and development of this station for more than three years. “This stop will bring greater convenience for people with disabilities to access important community resources and all valley residents will have convenient access to the surrounding businesses.”

“Phoenix is a big city and needs a robust multi-modal transportation system,” said former Congressman Ed Pastor. As a long-time supporter of the project and Chair of the Citizens’ Transit Committee, Pastor advocated for the station to be situated at 50th Street.

Phoenix Councilwoman Thelda Williams, Chair of the Phoenix Transit and Infrastructure Subcommittee, said, “Access to public transit is a barrier to full participation in the community for people who do not drive. This stop will bring greater access to this hidden jewel within our city. The Ability360 Center is a point of pride for Phoenix.”