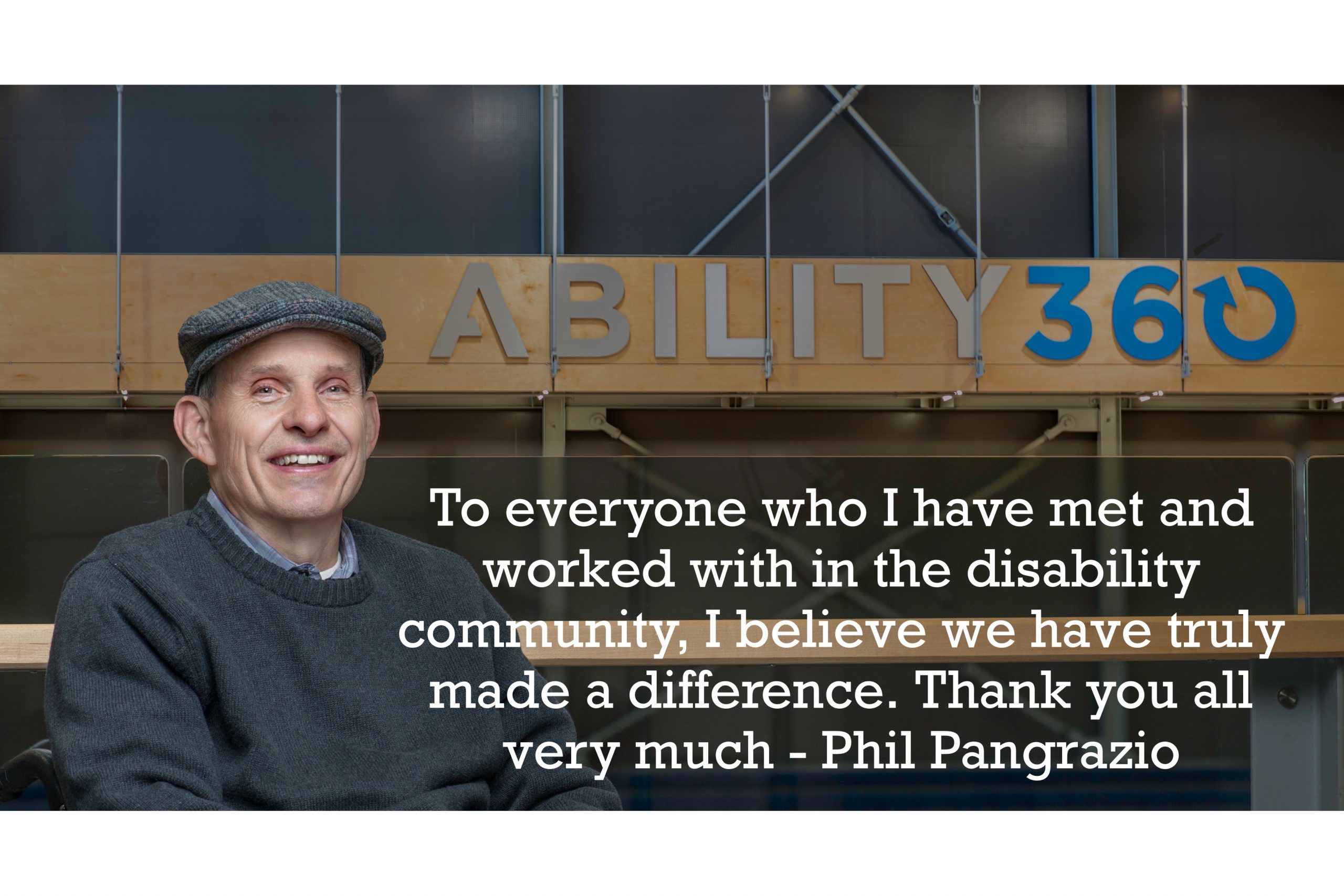 National Search Will Be Conducted For His Successor

PHOENIX, Ariz. (June 2, 2020): Ability360 President and CEO Phil Pangrazio, who has led the organization for 20 years, has announced that he is stepping down effective December 31, 2020.

“Stepping down comes with great emotion, as this has been my life’s work for the past 20 years, but I feel it is time to let the next generation take over,” Pangrazio said. “With my disability, things are only getting harder, and I am running out of gas. I think it makes more sense for me to leave now, than sometime down the road when I find my health more in crisis. I love the organization and the work we do.”

Andrew Reilly, chair of the Ability360 Board of Directors, thanked Pangrazio for all that he has done and said a Board committee will be organized to undertake a national search for Pangrazio’s successor.

“Phil has done a remarkable job guiding the organization’s strategic growth, and he has Ability360 well-positioned financially and structurally for continued growth and success,” Reilly said. “Phil leaves a tremendous legacy at Ability360, and with the many individuals living with disabilities throughout Arizona. Having him on board through the search process will ensure a smooth transition for the organization and our consumers.”

Under Pangrazio’s leadership, Ability360 developed into one of the nation’s largest Centers for Independent Living and established itself as a premiere model for other centers throughout the country. Pangrazio also guided Ability360’s growth to an annual budget of more than $48 million and the expansion of its programs and services to include Home Care Services, SSA Work Incentives Planning and Assistance, Ticket-to-Work Employment, Youth Transition Services, and the Living Well with a Disability program, among others.

He also directed the planning, construction and financing of the Ability360 Center, home to Ability360 and 9 other non-profit organizations that serve people with disabilities in Arizona. Also with his guidance, the $12.3-million Ability360 Sports & Fitness Center was opened in 2011, the first of its kind in the Southwest.

Before joining Ability360, previously known as ABIL or Arizona Bridge to Independent Living, Pangrazio spent 10 years at Maricopa Integrated Health System and Maricopa Medical Center, where he held several positions in financial management and administration.
Pangrazio, who has been a wheelchair user for nearly 42 years after being paralyzed in an accident, was a founding member of Arizona’s first quadriplegic wheelchair rugby team. In 2010, he received the Martin Luther King Jr. “Stand Up for Justice, Living the Dream Award” and in 2017 was honored with the “Detective Walter Olsen Lifetime Achievement Award,” both from the City of Phoenix. Pangrazio serves on several boards of directors. He lives in Ahwatukee.

“I’d like to thank every member of the Ability360 team for their hard work, passion and dedication to the organization and those we are here to serve,” he said. “It has been a wonderful ride, and I will miss being in the midst of this work on a daily basis, although I’m not quite out the door yet!”